A Global Roadmap for Autogas

Meeting the growing demand for mobility

The demand for mobility – of people and goods – is rising inexorably across the world as the population grows and people get richer. Most of this demand takes the form of road transport: two- and three-wheelers and passenger cars to move people and commercial vans and trucks to move goods. And unless the economy collapses, demand for road transport will keep on rising for the foreseeable future.

There is a close correlation between the size of the global economy, the total distance travelled by road vehicles and the amount of energy they consume. Most of the increase in road transport is occurring and will continue to occur in the emerging economies of Asia, Africa and Latin America, where population and economic activity are expanding most rapidly (Figure 1).

“Vehicle ownership rates in the emerging economies are still far below the saturation point reached in most of the advanced economies, pointing to further strong growth in the global vehicle fleet over the coming decades.” 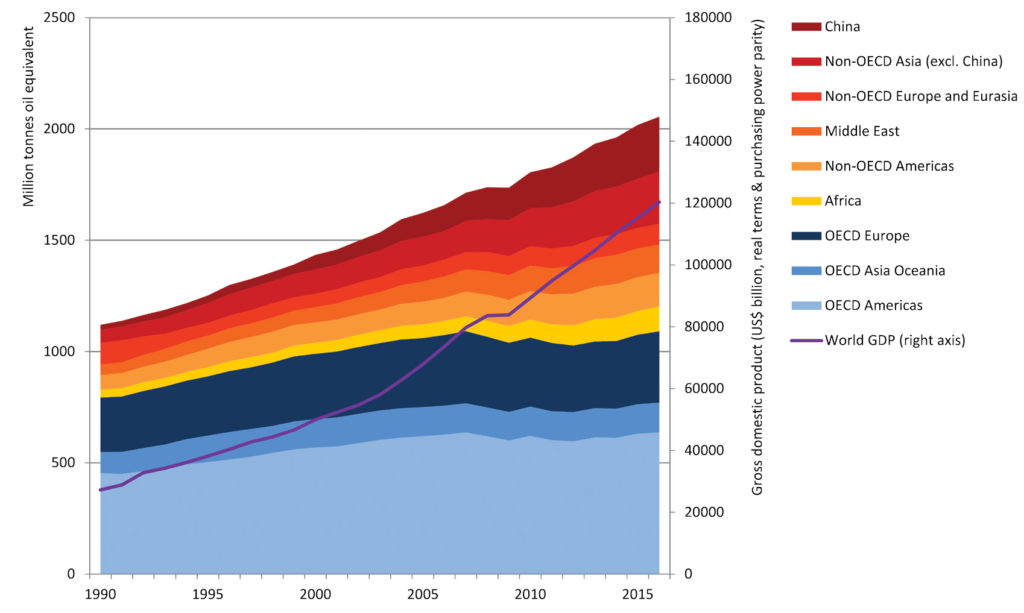 Source: International Energy Agency (IEA) online databases; International Monetary Fund, World Economic Outlook online databases.
The global fleet of road vehicles – the main indicator of the demand for mobility – will undoubtedly continue to expand for decades to come. It grew from 892 million in 2005 to 1.282 billion in 2015 – a rise of 44%.1 Light-duty vehicles (LDVs), including passenger cars and commercial vans, currently make up about 85% of the total fleet. Growth in the global fleet has been strongest in the emerging economies, where ownership rates are still far below the saturation point reached in most of the advanced economies.

This points to further strong growth in the fleets in those countries over the coming decades as their populations grow and the income gap with the advanced economies narrows further. The latest long-term projections from the International Energy Agency show the global fleet rising by half by 2030 and by 87% by 2040, with most of the growth coming from Asia, Latin America, Africa and the Middle East (Figure 2). Vehicle ownership per 1000 people is projected to climb by 76% from 159 in 2015 to 280 in 2050. 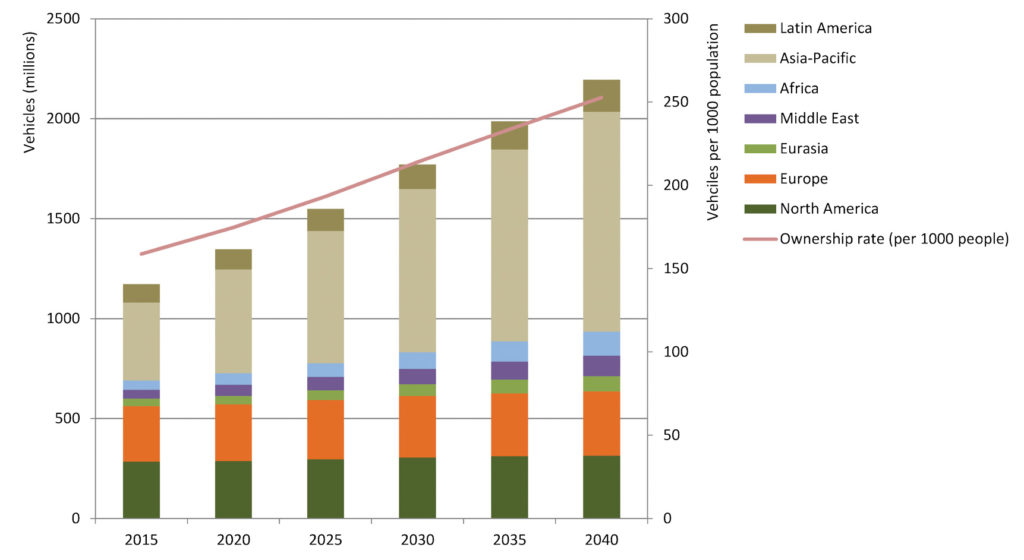 Meeting the growth in demand for road transport mobility will require more energy. Cars and trucks have been getting more efficient over the years, but the pace of improvement in fuel economy has never been fast enough to offset the underlying growth in demand for mobility.

Average fuel economy of light-duty vehicles (LDVs, including passenger cars and vans) improved by around 1.2% per year between 2005 and 2015, taking account of changes in the size and configuration of the fleet (GFEI, 2018). Over the same period, global road fuel consumption grew by more than 2% per year.

“Air pollution is the “new tobacco”. 97% of cities in low and middle income countries, and almost half in high-income countries, fail to meet the Air Quality Guidelines of the World Health Organization.”