The Republic of Korea was one of the first countries to promote the widespread use of Autogas and, for many years, had by far the largest Autogas market in the world. Demand took off in the 1970s as taxis started to adopt the fuel and surged in the 1990s in response to strong government support for the fuel’s use in taxis, other fleet vehicles and public buses, mainly through a large fuel-tax advantage. Environmental restrictions on diesel vehicles also helped encourage Autogas use by high-mileage vehicles. By 2010, consumption of Autogas had reached close to 4.5 million tonnes with almost 2.5 million vehicles running on the fuel – despite a ban on the use of Autogas in private passenger cars (Figure B12.1). 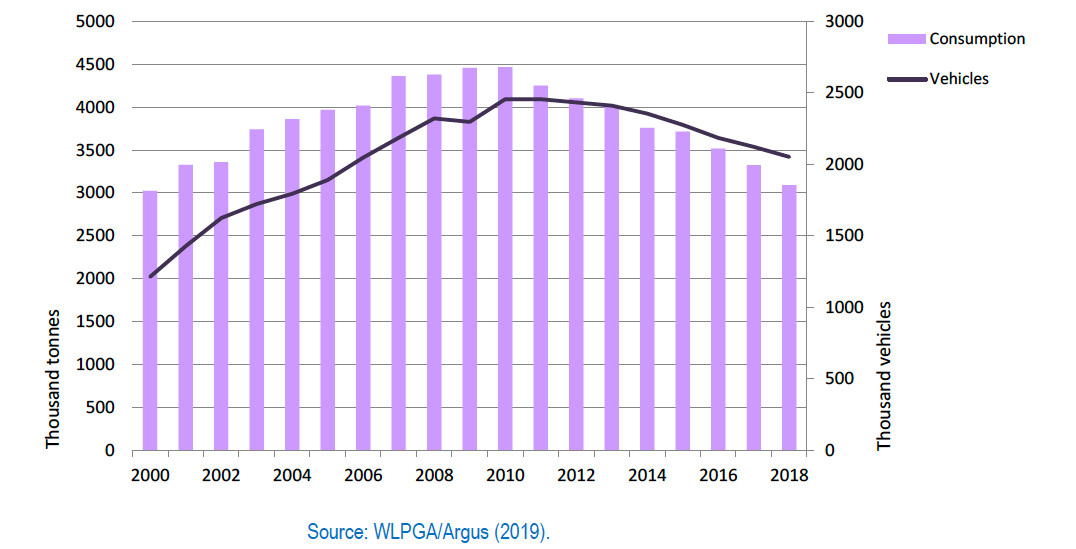 The Autogas market began to contract in 2011, with sales falling every year since to just 3.09 million tonnes in 2018 – almost one-third below their 2010 peak. For the first time since the 1990s, Korea no longer has the world’s largest Autogas market, falling behind Turkey. The main reason for the reversal in the fortunes of Autogas in Korea was a gradual change in government policy towards Autogas use that began in the 2000s, motivated by the perceived improvement in emissions performance of new diesel and gasoline vehicles relative to Autogas vehicles, and the objective of boosting revenues from automotive-fuel taxes. Excise duties on Autogas were raised progressively in order to reduce the pump-price advantage of Autogas over diesel and gasoline (see below). By the end of the 2000s, the attractiveness of Autogas to high-mileage commercial vehicle-owners had been greatly diminished, leading to a shift in demand for new commercial LDVs away from Autogas. The increased fuel-efficiency of the Autogas vehicle fleet also contributed to a drop in sales of the fuel. By 2018, Autogas accounted for less than 10% of total road-transport fuel consumption – down from over 16% at the end of the 2000s – and one-third of total LPG consumption in Korea.

The number of Autogas vehicles on the road in Korea has also declined since the turn of the decade, but at a slower rate than fuel use, reflecting the inherently slow rate of vehicle turnover and improving fuel efficiency. At the end of 2018, there were still 2.05 million Autogas cars in use, supported by a network of 1 964 refuelling stations. Around three-quarters of the current Autogas vehicle fleet are private LDVs (including taxis and rental cars) and the rest are sports utility vehicles, specially designed vehicles for disabled people, minibuses and commercial vans. Around 95% of the country’s taxis still run on Autogas, as dedicated diesel taxis are not yet marketed in Korea (see below). Autogas vehicles make up about 9% of the country’s total vehicle fleet. Most of these vehicles are locally manufactured mono-fuelled OEMs. At present, four companies – Hyundai, Kia, RSM and General Motors – market a total range of 16 dedicated Autogas vehicles.

The exceptional size of the Korean Autogas market today, despite the recent contraction in demand, is primarily the result of many years of highly supportive government policies, including favourable taxation of Autogas. Excise-tax differentials were reduced progressively over the five years to 2006 under a plan to restructure the taxation of all automotive fuels, but the tax on Autogas is still significantly lower than that on diesel and gasoline (Table B12.1). 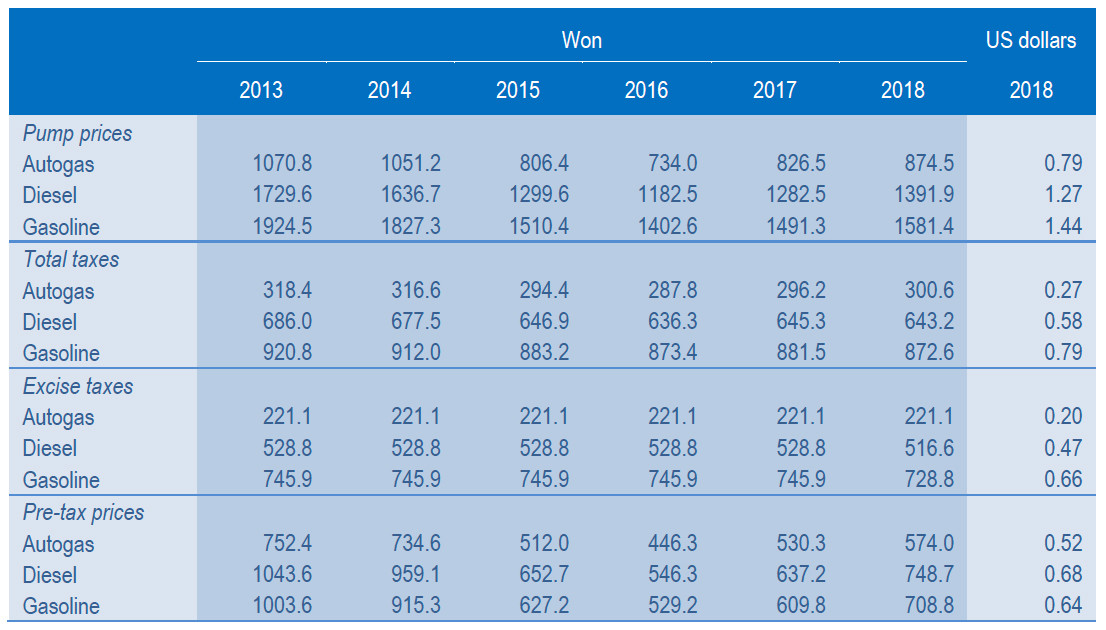 Government tax policy aims to keep pump prices of Autogas at roughly 50% of those of gasoline and diesel prices at 85% of gasoline prices. Since July 2008, the tax on Autogas has stood at 221 won/litre. The taxes on gasoline and diesel, which were constant until 2017, were reduced slightly in 2018 to 729 won/litre and 517 won/litre respectively. The pre-tax price of Autogas also remains markedly lower than that of both diesel and gasoline, partly because LPG imports are exempted from a small duty applied to the other fuels. As a result, the pump price of Autogas was equal to 55% that of gasoline and 63% that of diesel in 2018 – more or less the same ratios as in 2017. Thus, the price of Autogas relative to gasoline is above the official target, while that of diesel is roughly on target.

An important change in Autogas policy occurred in March 2019 when the government lifted all remaining restrictions on the private ownership of Autogas vehicles with the goal of improving air quality. This is expected to give a major boost to the Autogas market. The government forecasts that the change will boost the Autogas vehicle fleet and fuel demand by around a third by 2030.1 Previously, only commercial operators such as taxis and car-rental companies were allowed to buy and operate new OEM vehicles, though there are exemptions for disabled people, compact cars, vehicles that can carry more than seven people and hybrids. The rules had already been eased in January 2017, allowing anyone to own a used Autogas car once it has been registered for at least five years. This permitted second-hand Autogas taxis and rental cars to be sold to private owners. As a result, several car-rental companies launched leasing programmes, which include the option for customers to own Autogas cars after renting them for five years. Autogas vehicles owned for more than five years by handicapped people and citizens of national merit could also be sold to the general public.

Regulations concerning the use of diesel vehicles as taxis remain critical to the prospects for Autogas in Korea. At the end of 2013, the government decided to lift the ban on taxis using diesel vehicles from September 2015 for environmental reasons, on condition that they meet Euro-6 standards. However, the government has since tightened the regulations, due to concerns about the environmental and health risks associated with diesel emissions. Further changes are imminent; for example, the government plans to introduce extra NOx emission compliance tests during car inspections, which are thought to be very challenging for diesel vehicles. And the government has announced a plan to scrap 2.2 million diesel vehicles by May 2022 by offering incentives to replace them with Autogas or LNG vehicles, or EVs.2 The government is taking steps to accelerate the scrapping of old diesel trucks, including funding a scrapping schemes, and, in late 2018, eliminated subsidies for “clean” diesel cars; it is also considering raising taxes on diesel.3

The recent change in Autogas policy has led the country’s leading carmakers to introduce new Autogas OEM models onto the market. Hyundai plans to release an Autogas model of the new Sonata before the third quarter of 2019, while Renault Samsung will be introducing the QM6 – the country’s first Autogas-powered SUV. And Kia is currently considering including an Autogas model of the K5 in its new line-up scheduled to be revealed in the second half of 2019.4 Autogas OEM sales are already picking up, jumping by nearly 40% in April.5 Meanwhile, Korean car makers have delayed the launch of specially designed diesel taxis, which are not yet being sold on the Korean market.

The Korean government does not make available grants or any other form of financial incentive for OEM Autogas LDV purchases on the grounds that favourable taxation is sufficient to encourage the use of Autogas.6 However, other measures are used to promote Autogas. The government operates a programme to encourage the conversion of old diesel trucks to Autogas. Grants of 80-90% of the total conversion cost are available. This programme, which began in 2005, enabled the retrofit of 197 000 Autogas engines by the end of 2015. It is scheduled to continue to 2024. Clean vehicle mandates also boost Autogas sales, as some Autogas models have been classified as low-emission vehicles. The government mandates the purchase of minimum proportions, ranging from 20% to 30%, of clean vehicles in its own LDV fleets. Car manufacturers are also obliged to sell a certain portion of clean vehicles. In addition, in Seoul, designated low-emission vehicles are granted free or discounted access to fast-lanes on highways to encourage their adoption. The government also funds a research and development programme for Autogas LDVs and HDVs (Box 12.1). This led to the commercialisation of Autogas hybrid LDVs. More recently, the government has supported a research programme to develop direct injection Autogas engines.

Box B12.1: A new Autogas truck under development for the Korean market

The government is funding the development of a new 1-tonne Autogas truck, in cooperation with Hyundai Motors, the Automotive Technology Institute and universities. The new truck, which will use advanced liquid propane direct injection technology, is designed to meet strict new emission standards that were due to be introduced in September 2017. At present, 1-tonne diesel trucks – led by the Kia Bongo and Hyundai Porter – are the most popular trucks in use in the commercial sector, because of their attractive prices and compact size. But their prices are set to rise with the modifications that will be necessary to meet the new emission standards. As a result, the new Autogas truck that is being developed is expected to provide an attractive alternative. It is due to be commercialised from 2020.

Autogas remains highly competitive with both gasoline and diesel for OEM LDVs. As a dedicated OEM vehicle in Korea costs no more than an equivalent gasoline model, the cumulative running costs are always lower (Figure B12.2). After 100 000 km of operation, the total savings on fuel amount to an impressive 3.9 million won ($3 340) based on 2016 prices. The payback period for a converted Autogas vehicle, which is rare in Korea, is 85 000 km, or little more than a year for most commercial users. A diesel vehicle breaks even with a gasoline one at just under 40 000 km, but is never competitive with an OEM Autogas one, based on a price premium for a diesel car of about 1.5 million won over a gasoline car. This analysis clearly demonstrates the continuing appeal of Autogas vehicles in Korea. Plans to reduce the diesel vehicle fleet could lead to a renaissance in demand for Autogas. 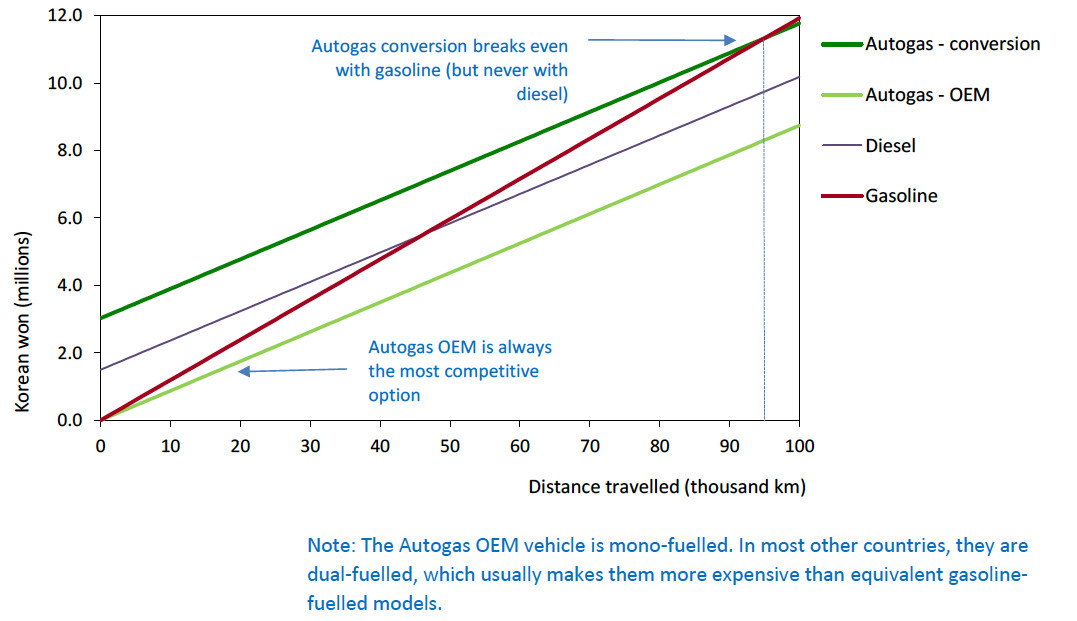