Mexico’s Autogas market has been on a roller-coaster ride since the start of the century. Having expanded rapidly in the early 2000s, demand went into decline over the second half of the decade, only to level off and then bounce back strongly between 2014 and 2017, reaching an all-time peak of 1.31 Mt (Figure B14.1). Sales fell back marginally in 2018 to 1.29 Mt. 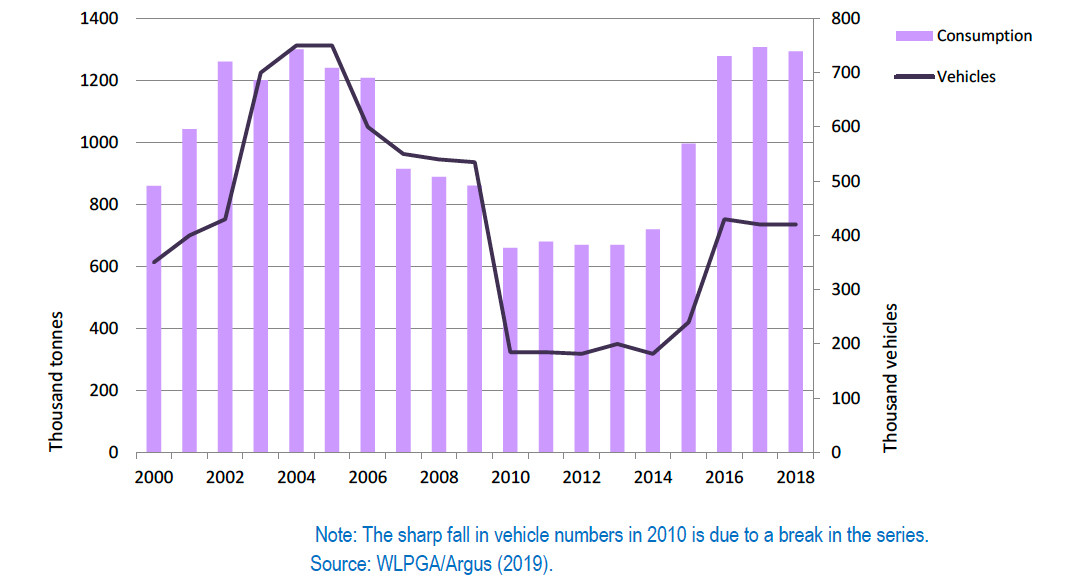 Diesel is the main competing fuel, with several new diesel LDV models having been introduced onto the Mexican market. But environmental concerns and higher prices have held back diesel consumption in recent years and stimulated more interest in Autogas, which is once again competitively priced. The Mexican government forecasts continuing growth in Autogas demand, totalling more than 25% between 2018 and 2032 (SENER, 2018). The use of CNG remains tiny and that of other alternative fuels negligible. Autogas accounts for about 2.5% of total automotive-fuel consumption, down from a high of 3.5% in the early 2000s but up from only 1.3% in 2012.

There are currently an estimated 420 000 Autogas vehicles in use in Mexico – about 1% of the total car and truck fleet. Most vehicles are old converted gasoline cars, most of them operating in the northern and central-western regions.1 No OEM Autogas models are marketed in Mexico at present. However, an agreement was reached in early 2017 between the Mexican Association of Liquefied Gas Distributors (Amexgas), the Association of Distributors of Liquefied Petroleum Gas (ADG), the Regional Chamber of Gas, and Alden Group, one of the main dealers of cars and trucks in the country, to allow buyers of new gasoline vehicles to convert them to Autogas and still keep the original warranty from the factory.2

There is growing interest among fleet operators in switching to Autogas. Companies, including taxi operators, in Jalisco and Nayarit are in talks with the authorities to adopt Autogas in their vehicles as a way of improving air quality.3 Around one-quarter of taxi drivers in Aguascalientes has already switched to Autogas or CNG.4 There are 2 150 refuelling sites selling Autogas around the country – a very large number relative to the size of the fleet.

The Mexican government launched a major reform of the energy sector in 2013 aimed at liberalising the market and stimulating investment. The oil sector, which has traditionally been dominated by the state monopoly, Pemex, is being opened up partially to competition. Since 2016, private companies are allowed to import oil and participate in downstream markets.

Government controls on transport fuel prices were largely removed in 2017. Previously, it set maximum retail prices on a monthly basis according to a formula that took account of a distribution margin based on actual costs and value-added tax. When the benchmark international price was greater than the domestic price, the rate for the country’s excise tax effectively became negative (though the tax was not explicit). Marketers obtained a compensatory tax credit equivalent to the price difference. In October 2016, the Mexican Congress approved the government’s initiative included in the Federation Income Law 2017, which accelerates price liberalisation of transport fuels in those regions where the energy regulator CRE determines that the market is sufficiently competitive. Price caps on Autogas were removed on 1 January 2017, while those on gasoline and diesel were removed progressively throughout 2017.

A new tax on oil products, known as the Special Production Tax and Service (IEPS), was introduced at the start of 2014, which pushed the prices of transport fuels up by around 0.20 pesos per litre. A carbon tax was also introduced in 2014, payable by producers and importers; the tax was set at 6.60 US cents/litre for Autogas, compared with 10.38 cents for gasoline and 12.59 cents for diesel.1 Value-added tax of 16% is applied to all fuels.

The pump prices of all transport fuels have risen steadily in recent years, but rose particularly sharply in 2017 as the market was liberalised: Autogas prices jumped by 15% on average, diesel prices by 20% and gasoline prices by 25%.2

This has further boosted the competitiveness of Autogas, the price of which had tended to rise less rapidly than those of diesel and gasoline in previous years. Differentials narrowed slightly in 2018, but Autogas remains highly competitive: the pump price was on average equal to only 53% of that of gasoline and 54% of the diesel price (Table B14.1). The price of Autogas relative to diesel, in particular, has fallen significantly since the mid-2000s, when they were almost at parity.

[1] www.thepmr.org/system/files/documents/Carbon%20Tax%20in%20Mexico.pdf
[2] Wide differences in Autogas prices across Mexico and large price fluctuations were reported in 2017, possibly reflecting a lack of competition and the fact that motorists are unaccustomed to shopping around for the cheapest fuel (LPG World, 23 January 2018). 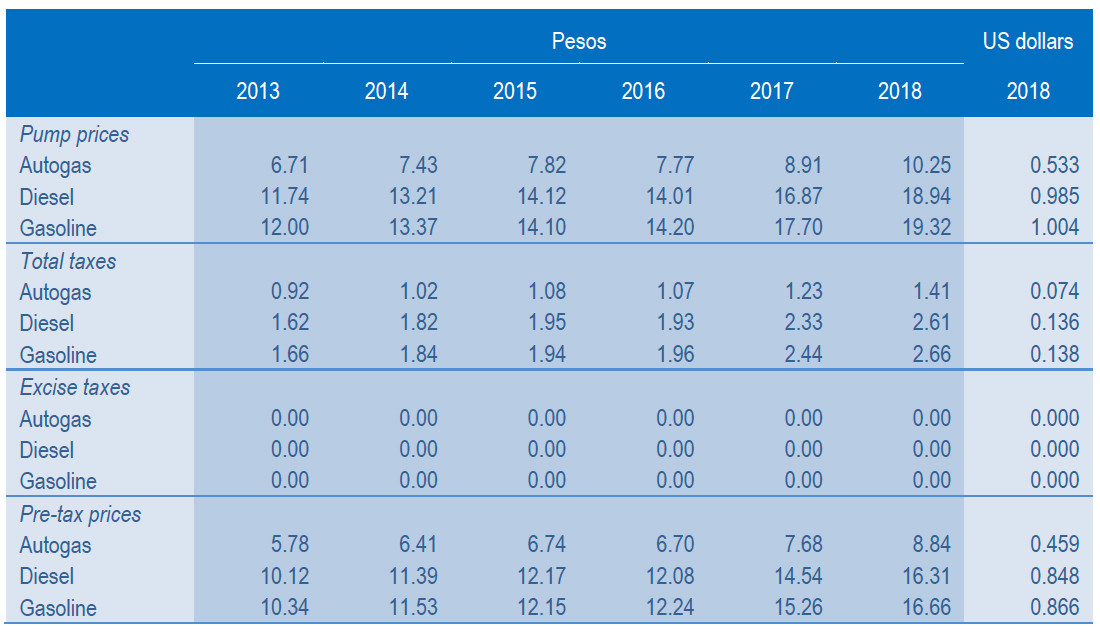 Assuming an average conversion cost of about 15 900 pesos (about $830), Autogas becomes competitive with gasoline at 29 000 km based on 2018 fuel prices (Figure B14.2).1 The net cost savings after 100 000 km amount to about 41 000 pesos ($2 150). Autogas is always more competitive than diesel, which breaks even with gasoline at close to 70 000 km. These calculations take account of the exemption from the annual road tax. The breakeven distance of Autogas against gasoline has dropped substantially in the last few years thanks to lower pump prices, which explains why Autogas sales have recovered. In 2006, Autogas broke even with gasoline at more than 100 000 km and was uncompetitive against diesel.

[1] The conversion cost for vehicles using more sophisticated fuel systems is estimated at over 20 000 pesos and as much as 30 000 pesos for some vehicles.