The Autogas market in France has been in constant decline since 2000, except for a brief recovery in the early part of the current decade, despite persistently attractive Autogas prices. The market first took off in the mid1990s following the introduction of a strong fiscal incentive. Initially, consumption grew rapidly to around 220 000 tonnes in 2000, driven by LDV conversions, but then began to decline, to around 100 000 tonnes at the end of the decade (Figure B6.1). This was largely the result of shifts in policy, as well as a highly publicised accident involving an Autogas vehicle, which undermined public confidence in the safety of the fuel. Fuel sales recovered a little in 2010-2011, apparently due to a temporary surge in OEM vehicle sales in 2010 in response to an increase in the price advantage of Autogas over gasoline at the pump and the announcement by the government that the tax credit for Autogas vehicles would be scrapped at the end of the year (see below). But fuel use resumed its downward trend in 2012, reaching just 55 000 tonnes in 2018. Autogas now accounts for only around 0.1% of total automotive-fuel use and 1.5% of total LPG consumption in the country. 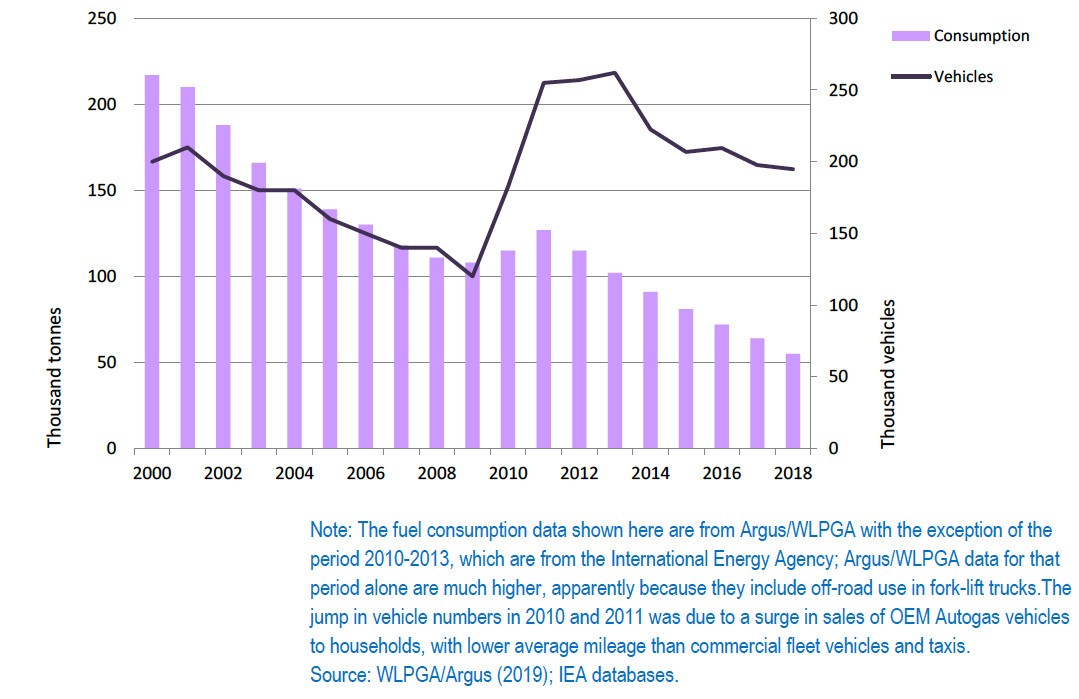 The number of Autogas vehicles declined progressively through the 2000s, but jumped to over 260 000 by 2013 as a result of a surge in new conversions and record OEM vehicle sales of over 75 500 in 2010. However, both conversions and OEM sales have since almost dried up. OEM sales still make up most new LPG vehicle registrations. Six carmakers – Alfa Romeo, Citroën, Dacia, Fiat, Opel and Piaggio – currently market OEM Autogas vehicles in France. In an effort to stimulate sales, Fiat recently cut the price of the Autogas version of its Tipo model to the same as that of the gasoline version.1 Dacia launched Euro 6 LPG versions for its entire vehicle portfolio (six models) in 2017.2 The total number of Autogas vehicles on the road in France dwindled to 195 000 at end-2018, or about 0.5% of the total car fleet. There were still around 1 600 refuelling stations across the country – barely fewer than in the early 2000s – with every metropolitan region well-served.

Government incentives for Autogas date back to 1996, when a policy was adopted of encouraging the use of Autogas (and CNG) through a sharp reduction in the excise duty on the fuel and the introduction of a range of other fiscal and regulatory measures. The duty was held constant between 1999 and 2014 at 6 euro cents/litre, but has since been raised each year, reaching 11.5 cents in 2018 (Table B6.1). But the duties on gasoline and diesel, already much higher, have also been increasing steadily. The duty on diesel in particular has risen significantly since 2012.3 The average exciseduty differential with Autogas in 2018 stood at 49.3 cents/litre for diesel – the leading road-transport fuel in France – and 57.6 cents/litre for gasoline. In addition, the government introduced a small carbon tax in 2015, further increasing the price differential between Autogas and the other two fuels.4 As a result of the lower excise and carbon taxes on Autogas, its price at the pump was 43% lower than that of diesel and 46% lower than that of gasoline in 2018.

There are a number of other public policy measures in place to encourage the use of Autogas. Until the end of 2010, the principal measure was a tax credit of €2 000 for the purchase of an OEM Autogas vehicle with CO2 emissions of less than 136 grammes per kilometre (g/km) or the conversion of gasolinefuelled vehicles with emissions of less than 155 g/km. This incentive, which had been in place for several years, was abolished for budgetary reasons in 2011. In its place, the government introduced a system of ecological bonuses and penalties based on vehicle emissions; any new vehicle with low emissions, originally including one fuelled by Autogas, qualifies for a bonus (a cash grant) at the time of purchase. The threshold for the bonus has been lowered progressively in recent years and, as of 1 January 2018, only applies to electric cars (€6 000). The penalties for polluting cars and the threshold for penalties were also further increased in 2018 and again in 2019: the threshold is now 116 g/km (down from 120 g/km in 2018), with penalties rising to 10 500 euros for cars emitting 191 g/km or more. The government has also announced that the threshold will be lowered further by 3 g/km in both 2020 and 2021. Since Autogas-fuelled cars emit less than the equivalent monofuelled gasoline car, penalties are lower.

[3] The government has announced its intention to progressively eliminate the excise-tax differential between diesel and gasoline.
[4] The tax is due to rise in a progressive manner over 2015-2030. In 2017, the tax amounted to 4.7 cents/litre (excluding VAT) for Autogas, 7 cents for gasoline and 8.1 cents for diesel. 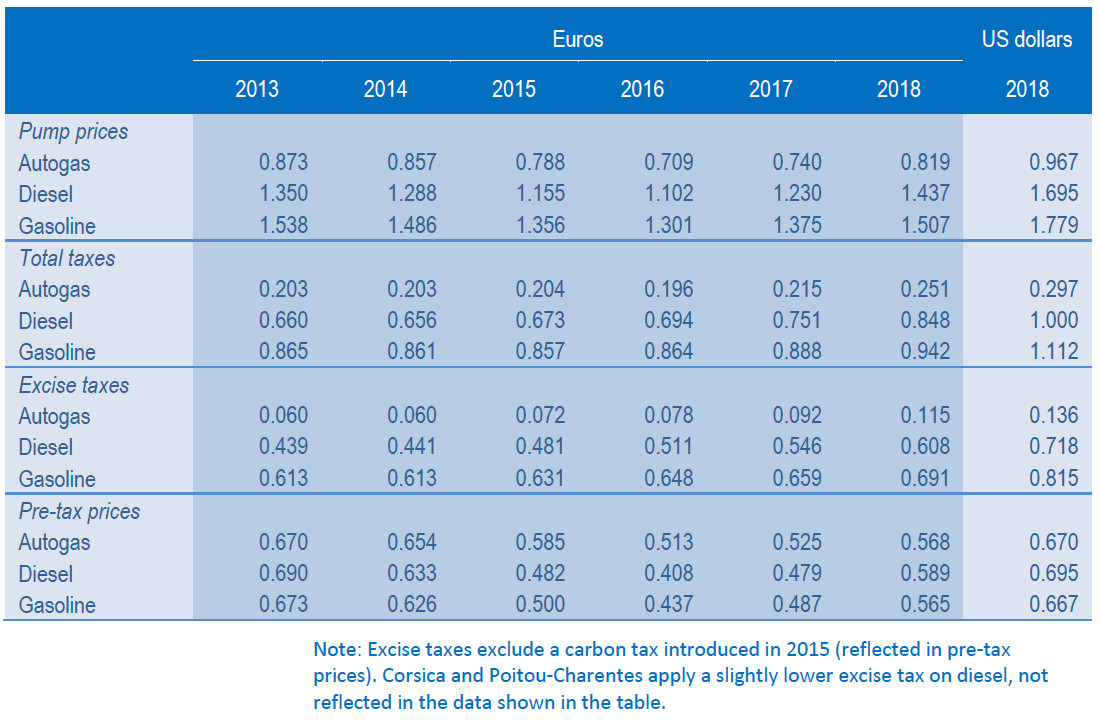 The other main tax measure is a partial or complete exemption of the initial vehicle-registration tax for commercial and non-commercial Autogas vehicles in 10 out of the 11 metropolitan regions (the rebate is also applied to CNG, battery EVs and cars that can run on E85 ethanol). Businesses can also recover all of the VAT on Autogas fuel purchases for LDVs, compared with 80% of the tax for diesel and 10% for gasoline.1 In addition, the 2017 finance law introduced a two-year exemption from the business tax on Autogas cars that emit less than 110 g/km.

In 2016, the French government revised its system of vehicle classification according to their pollutant emissions. Autogas vehicles are now included in the second least polluting category (the first one, or category 0, covering only EVs and hydrogen-powered cars) regardless of their registration date. This classification is intended to be used by local authorities in implementing measures affecting parking and driving in certain areas (air quality protection zones) during periods of severe air pollution periods to encourage the use of less polluting fuels. Paris and Grenoble were the first cities to introduce a requirement to purchase a “Crit’Air” sticker based on the new classification system and several other cities have followed suit or are planning to do so.

In January 2018, the government launched a new incentive scheme to encourage owners of private and commercial cars, vans and trucks to scrap an old polluting vehicle (older than 1996 from a gasoline vehicle and 2001 for a diesel) and replace it with a new or used “clean” cars emitting less than 130g CO2/km and with a Crit’Air rating of 1 or 2 (all Autogas vehicles fall into the first category). The incentive, which was restricted to low-income families in 2017, amounts to €1 000 (€2 000 for low income families, up from €1 000 in 2017). The rules for qualification for the bonus were tightened in 2019 and the emissions threshold lowered to 122 g/km in January and 117 g/km in August, though the size of the bonus was increased to a maximum of €3 000 (€5 000 for EVs or hybrids).

Autogas is also promoted through other local regulatory measures. For example, the departmental council of Mayenne announced in 2018 its intention to acquire 40 new AFVs.2 Autogas vehicles can benefit from free or reduced car-parking fees in some cities. At present, several cities offer free parking for two hours for Autogas and other clean vehicles and other cities are considering doing likewise.3 The Environment Agency and the National Association of Green Vehicles signed a partnership agreement in March 2016 to develop this type of incentive.

[1] For vans and trucks, 100% of the VAT on diesel and gasoline can be recovered. Up to 2017, none of the VAT could be recovered on gasoline used by commercial LDVs; the rate is set to rise in stages to 80% in 2022 (the same rate as for diesel).
[2] https://auto-gas.net/mediaroom/northern-french-territory-plans-to-renew-fleet-with-alternative-fuel-vehicles/
[3] http://www.voiture-electrique-populaire.fr/actualites/tarif-preferentielstationnement-peage-212

Autogas remains the cheapest fuel option in most cases, even where the vehicle scrapping incentive is not applicable. An OEM Autogas vehicle, based on a typical cost premium of €1 500 compared with a gasoline-powered car, now breaks even with gasoline at just 35 000 km and a converted vehicle at 49 000 km (Figure B6.2).

Both an OEM Autogas vehicle and a converted Autogas vehicle, based on a typical conversion cost of €2 000, are always competitive against diesel, regardless of distance. The running costs per kilometre of Autogas and diesel are very similar so it is the difference in the price of each type of vehicle that determines which is the cheapest option in the long run. At present, most new diesel cars cost more than either an OEM Autogas car or a new gasoline car immediately converted to run on Autogas. The prospect of tighter environmental restrictions on diesel vehicles and higher fuel taxes should add to the attractiveness of Autogas. CNG remains generally uncompetitive, because the relatively low fuel price is insufficient to compensate for the high cost of conversion, the inconvenience it engenders and the poor availability of the fuel. EVs also remain unattractive in most cases for now, despite vehicle-purchase subsidies. 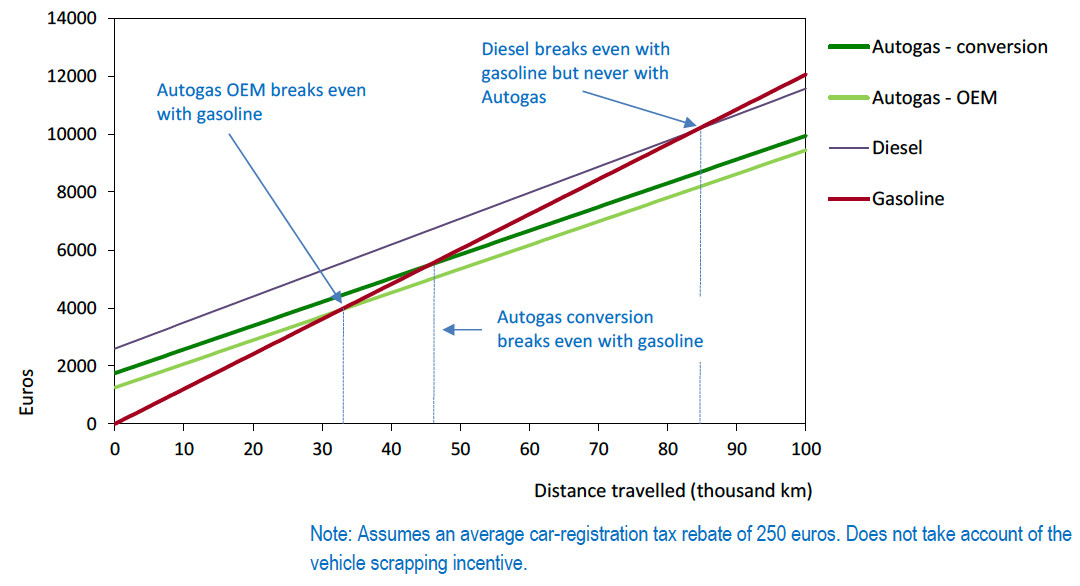