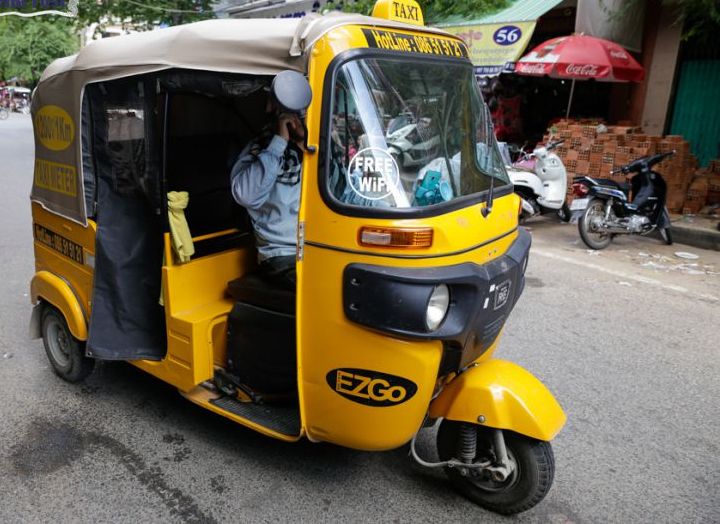 Launched in March, EZ Go is the first company in Phnom Penh to operate a commercial fleet of three-wheeled tuk-tuks built to run on LPG. The vehicles are more fuel efficient than standard petrol- or diesel-engine “moto-remorques” (a motorcycle with a carriage to transport passengers), allowing their drivers to realise significant savings at the pump over time.

In addition, EZ Go installed meters in the vehicles to determine the cost of a ride according to standardised distance-based rates, avoiding the need to negotiate fares and preventing drivers from gouging customers – a common complaint by tourists.

“I think the price of our rides is very low for customers, and it is a standardised price so we cannot cheat our customers,” EZ Go owner Top Nimol said. “We also do not charge any additional fees for traffic jams because our fares are based on distance and not time.” EZ Go owns all of its tuk-tuks and offers its drivers the choice to either work for a salary or rent the vehicles for $7 a day.

The company and drivers expect these vehicles to succeed in Phnom Penh with an increasing popularity among customers, due to their nimbleness and comfort, suggested motor enthusiast Hout Seriepanha, deputy manager of a Japan Motor motorbike shop. “The Bajaj tuk-tuk model is assembled into a single piece rather than being a detachable carriage pulled by a motorbike,” he said. “This makes it easier for it to turn and is safer for both the passenger and driver, but also more comfortable.”

Moreover, this Autogas fleet will bring major economical and environmental benefits to the operator and users.