Turkey today has the largest Autogas market in the world, having overtaken Korea in 2018 – the result of spectacular growth in consumption since the end of the 1990s, when a ban on Autogas vehicles was lifted, and especially since 2003. Consumption of Autogas overtook that of gasoline consumption in 2009, making Turkey the only country in the world where Autogas sales are bigger than those of gasoline. Autogas consumption more than doubled between 2010 and 2018, reaching a record 3.28 million tonnes (Figure B22.1). Autogas meets an estimated 13% of the country’s total demand for automotive fuels and accounts for 76% of Turkey’s total LPG consumption, three-quarters of which is met by imports. 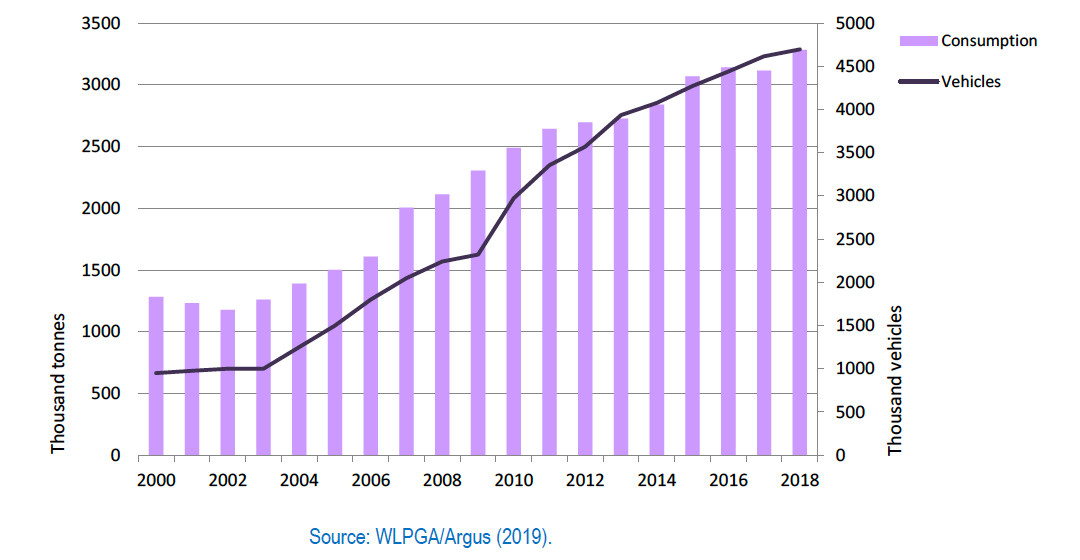 The boom in Autogas use in Turkey is the result of a huge expansion in the number of vehicles able to run on the fuel. By the end of 2017, there were an estimated 4.7 million Autogas vehicles in use – around 40% of the country’s total fleet of passenger vehicles. The fleet continued to expand in 2017, by 4%, and is now twice the size of 2009. No country has more Autogas vehicles on the road. The number of conversions has slowed over the last few years as the market approaches saturation. Most vehicles that use Autogas are privately owned, converted gasoline-powered cars; taxis, which make up just 1.5% of the total Autogas fleet, account for 7% of Autogas fuel sales because of their high mileage. The share of taxis in the total Autogas vehicle fleet has fallen sharply in recent years as taxi-owners have tended to opt most often for diesel, but this trend is expected to reverse with growing concerns about pollution from diesel engines.

There are a limited number of OEM Autogas models on sale in Turkey, though carmakers are considering launching new models. Honda’s Civic Sedan, Fiat’s Egea and Hyundai’s i10 now account for the bulk of sales of new Autogas cars with an OEM warranty. But conversion-kit manufacturers now offer engine warranties to new cars, expanding enormously the range of cars that are converted after purchase. In addition, many car dealers have signed agreements with the conversion-kit manufacturers to enable them to offer the option of converting new cars to Autogas at the time of purchase, boosting consumer confidence. Turkey has a large network of service stations offering Autogas. In total, there were 10 390 refuelling sites at end-2018 – about 80% of all the filling stations in Turkey.1

The take-off in Autogas use in Turkey came about more as a result of a social policy of low taxation of LPG as a household fuel than a deliberate policy of promoting alternative fuels. An unregulated conversion industry took hold to allow motorists to take advantage of the low price of LPG and low taxes on Autogas. The Turkish LPG market was deregulated at the beginning of 2005, allowing wholesalers and retailers to set pre-tax prices freely, though the regulatory authority retains the right to set a temporary ceiling on prices if it considers that there is a lack of competition in the market. No non-fiscal incentives for Autogas are currently in place.

Tax policy changed several times during the early 2000s, as the government sought to control the growth of the market and prevent suppliers from illegally diverting LPG from the cylinder market to the Autogas market. Since the middle of the 2000s, taxation of Autogas has been more stable, though tax rates have risen. The same rate of VAT is now applied to Autogas as to gasoline and diesel (a higher rate had been applied in 2000-2002 to rein back demand) and excise taxes on Autogas have been held well below the level of those on the other two fuels. From 2013 to 2016, the excise tax on Autogas was constant at 0.68 liras/litre, increasing to 0.84 liras in 2017 and 1.0 lira in 2018; the tax on gasoline, which had been unchanged since 2013, also increased by 0.10 lira in both 2016 and 2017 to 2.38 liras, remaining unchanged in 2018, while that on diesel increased by half as much to 1.79 liras over the same period (Table B22.1). Consequently, the tax advantage of Autogas over both diesel and gasoline has diminished since 2016.

Despite favourable taxation, Autogas prices at the pump are not much lower than those of gasoline and diesel in per-litre terms, because wholesale prices are relatively high. In 2018, the average price of Autogas was 70% of that of gasoline and 76% of that of diesel. The price gaps have changed only slightly since the start of the decade. 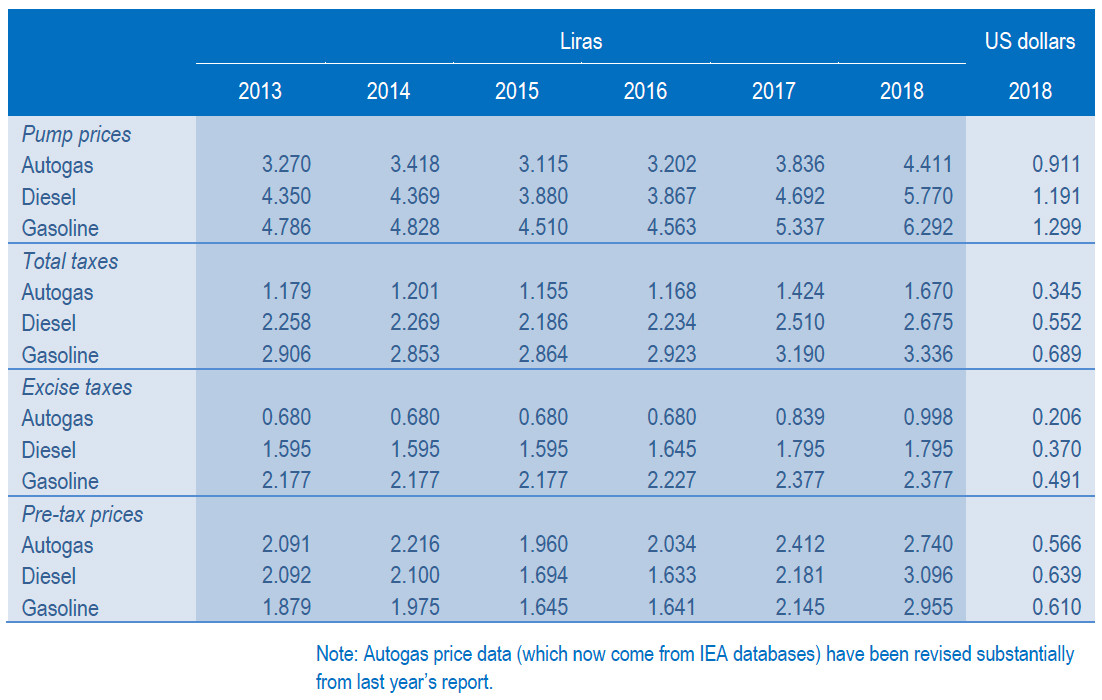 To improve technical performance and ensure safety, the government established stringent conversion standards and laws in 2005. All conversion centres must be licensed by the Turkish Standards Institute and all conversions must be approved by a qualified engineer; the converted vehicle must then be tested for leaks by an independent organisation every two years. As a result, the safety and reliability of conversions has increased. There are now around 1 800 accredited conversion centres offering a wide range of kits, some of which have been developed by Turkish firms. The European Autogas Quality Standard EN 589 became mandatory at the beginning of 2004, which has helped to reduce problems caused by poor fuel quality. The government is also considering authorising Autogas cars in subterranean or closed car parks.1

The low cost of conversions in Turkey, due to low labour costs and economies of scale, mean that Autogas breaks even with gasoline at relatively short distances. For a good-quality conversion, which is assumed to cost around 2 200 lira ($450),1 the distance is about 36 000 km based on 2018 prices (Figure B22.2). But an OEM vehicle, which currently costs on average 5 750 liras more than a gasoline equivalent, breaks even only at over 90 000 km, because the fuel cost savings per kilometre are not very large. Allowing for the better mileage of a diesel vehicle compared with Autogas, the per-km running costs are marginally lower for the former. But the purchase price of a new diesel car is much higher than that of an OEM Autogas car. Assuming a price difference of about 8 000 liras ($1 650), diesel breaks even with Autogas only after about 125 000 km and with gasoline at just under 100 000 km. This analysis clearly demonstrates the continuing attractiveness of Autogas over both gasoline and diesel despite the relatively small price advantage of Autogas over gasoline and the lower price of diesel.