Russia has the world’s second-largest Autogas market after Korea and Turkey. The market took off in the 2000s when the previous policy of diverting LPG to the domestic sector for social reasons, which had deprived the Autogas sector of fuel, changed. Demand has surged since the late 2000s as Autogas has become much cheaper than competing fuels. It reached an estimated 3.15 million tonnes in 2018 – more than three times the level of 2008 and five times that of 2000 (Figure B18.1).1 Autogas now accounts for about 6% of total road-fuel consumption (it was little more than 2% in 2008) and 31% of total LPG use. 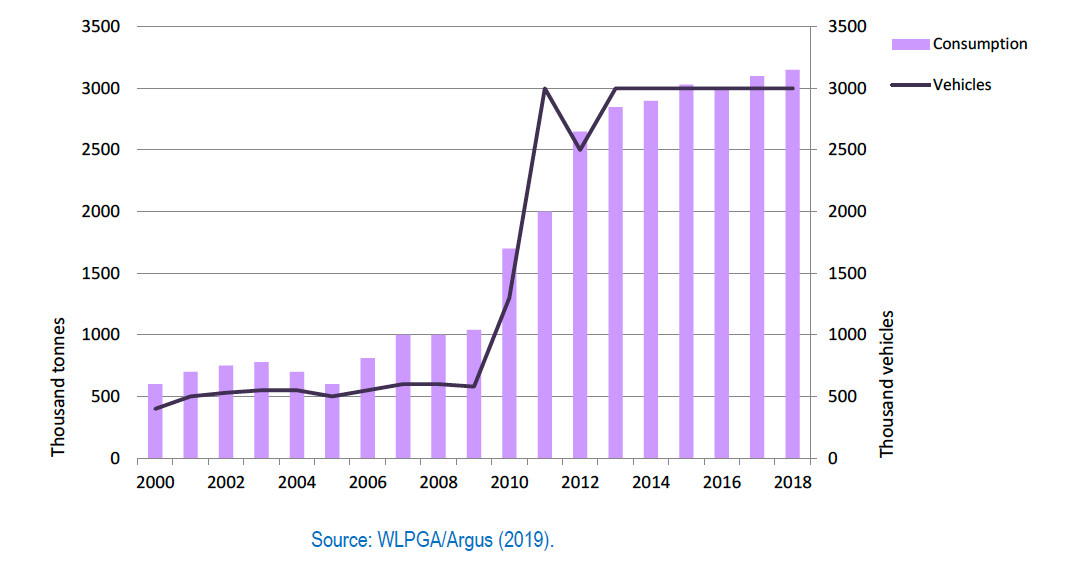 There are an estimated 3 million vehicles in Russia capable of running on Autogas – most of them converted gasoline cars, though factory-fitted OEM vehicles are available. The majority of these vehicles are commercial fleet LDVs and taxis. Most Autogas vehicles are thought to be more than ten years old.2 Demand for conversions of existing gasoline vehicles remains strong according to reports.3 There are 4 900 Autogas refuelling stations across Russia, the majority of which are owned by Gazprom and sell CNG alongside Autogas.

Autogas competes both with diesel and CNG in Russia (there are as yet very few EVs). CNG use has been rising rapidly in recent years, reaching 236 000 tonnes of oil equivalent in 2017, almost three times the level of 2015, but is still far less than that of Autogas. A recent change in government policy aims to boost the use of both CNG and Autogas.

[1] There is some uncertainty about the accuracy of Autogas consumption data for Russia. The data shown here are from WLPGA/Argus (2019). Data from the IEA show much lower consumption levels (392 000 tonnes for 2017, or 13% of the level reported by WLPGA/Argus).This enormous discrepancy is thought to be due to misreporting of sales by retailers to the authorities.
[2] Presentation by A. Rodichev, Russian LPG Market: Current Status and Trends (Dusseldorf, June 2011).
[3] https://auto-gas.net/mediaroom/autogas-market-gains-momentum-in-russia/

A law adopted in 2012 sets out a goal of stimulating the use of Autogas and natural gas as alternative fuels, as well as EVs. The most significant policy incentive for Autogas is Russia is the absence of an excise tax on the fuel (gasoline and diesel both carry taxes). The rate of excise tax on both gasoline and diesel has risen slightly in recent years, boosting the competitiveness of Autogas.1

As Russia is a major producer and exporter of LPG (primarily from natural gas processing), domestic wholesale prices are relatively low (as they are determined by the netback value of exports, which carry a large transportation component). Retail fuel prices, which carry VAT of 18%, are deregulated. The tax advantage and low pre-tax prices mean that the pump price of Autogas remains low relative to the other fuels. It was about 55% that of gasoline and 55% that of diesel in 2018 (Table B18.1). There are no other fiscal or regulatory incentives.

[1] For Euro-5 grade diesel. In line with the Russian government’s policy of encouraging the take-up of less polluting modern diesel vehicles, the government applies different rates of tax on diesel according to the grade of fuel, with higher rates being applied progressively to the lowest-quality grades.

The relatively low price of Autogas at the pump renders it highly competitive with both gasoline and diesel. Assuming a conversion cost of 48 000 rubles (about $800), a converted Autogas car breaks even with a gasoline-fuelled equivalent at 45 000 km, or less than a year of driving for a commercial fleet vehicle, based on 2018 prices (Figure B18.2). For an OEM Autogas vehicle, the break-even distance is 56 000 km, assuming a price premium of 58 000 rubles ($900). These distances have not changed since 2017. Autogas is always competitive with diesel, regardless of distance. This analysis clearly demonstrates the continuing attraction of Autogas.