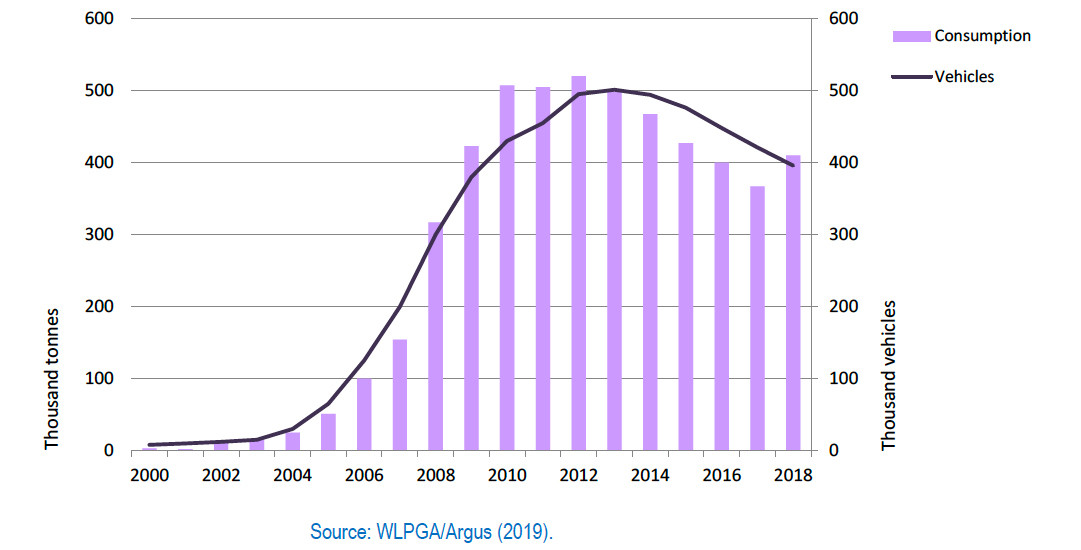 There are just under 400 000 Autogas-powered vehicles on the road in Germany, most of them converted gasoline cars, accounting for 0.8% of all vehicles. The fleet of Autogas vehicles is far bigger than that of any other alternative fuel technology, including hybrids, CNG/LNG and EVs.1 The number of Autogas vehicles continued to grow up to 2013, but uncertainty about the government’s Autogas policy has discouraged switching to Autogas to some degree and depressed sales of new OEMs since then. The government announcement in 2017 of an extension of incentives to 2022 seems to have revived interest in Autogas: vehicle registrations rose by 93% in the first half of 2019,2 though sales of new vehicles and conversions were still not enough to offset the scrapping of old vehicles. Kia, Lada, Opel and Hyundai are the carmakers offering Autogas models. Sales of EVs (including plug-in hybrids), in contrast, are booming, reaching 68 000 in 2018 – more than double the level of 2016 and continued to grow strongly into 2019.3 Autogas is widely available throughout the country, with a record 7 100 filling stations selling the fuel in 2018 – almost one in every two stations.

The federal German government supports the use of Autogas largely through fuel-tax incentives. Since the completion in 2003 of a major reform of energy taxation aimed at introducing ecological taxes, the rates of excise tax on Autogas, gasoline and diesel have been constant. The rate of tax on Autogas is 9.2 euro cents per litre – well below the rate of 47 cents levied on diesel and 65.5 cents on gasoline (Table B7.1). In absolute terms, the price differentials per litre between Autogas and gasoline, as well as between Autogas and diesel, are among the biggest of the countries surveyed for this report. As a result, the price of Autogas at the pump is relatively very low, at only 41% that of gasoline and 46% that of diesel. The price advantage in favour of Autogas increased steadily over 2012-2016, as pre-tax prices of Autogas generally rose less than those of the other fuels and has been fairly constant since 2017.

The prospects for the German Autogas market took a positive turn in June 2017, when the Finance Committee of the German Bundestag (parliament) agreed on an extension of the commitment, originally adopted in 2006, to keep the excise-tax rate on Autogas well below that on the other fuels until the end of 2022, in order to provide certainty to investors in Autogas distribution and refuelling infrastructure and motorists looking to switch to Autogas. Nonetheless, the tax will increase each year by 20% starting in 2019, reaching €409/tonne in 2023 (20.9 cents/litre), though this rate is still well below that levied on diesel and gasoline.

There are no vehicle-related incentives for Autogas in Germany, as the government considers that the fuel-tax advantage is sufficient. In 1993, the federal government issued a non-binding ordinance lifting all restrictions on parking by gas-fuelled vehicles in underground garages and multi-storey car parks. Only the states (Länder) of Bremen and the Saarland require some minor technical requirements to be fulfilled. EVs are now the focus of the German Government’s efforts to decarbonise the transport sector, with subsidies of €3 000 for plug-in hybrids and €4 000 for battery EVs currently on offer for new car purchases.1 Nonetheless, a recent ordinance, which adopts into national law EU guidelines on vehicle emissions, formally recognises the lower emissions from Autogas vehicles and bioLPG as a renewable source of energy.2 Measures to limit the sale and use of diesel cars are under discussion. 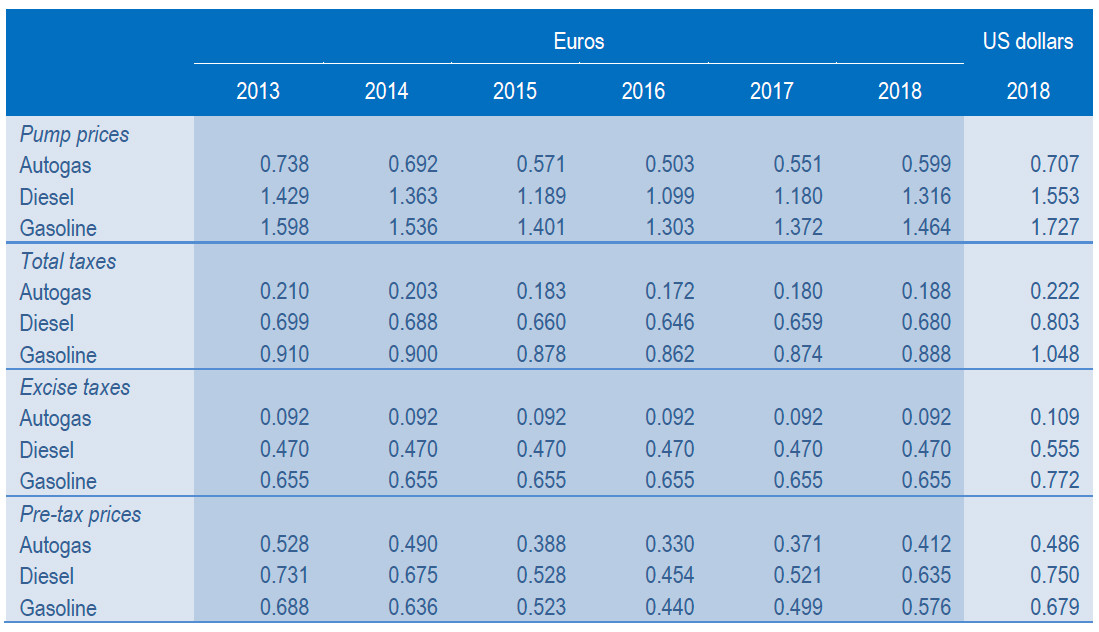 The very low rate of excise tax on Autogas relative to the taxes on gasoline and diesel means that an Autogas OEM LDV (which is assumed to cost about €1 800 more than a gasoline-fuelled equivalent and €800 less than a diesel vehicle) is always cheaper to run than an equivalent diesel vehicle and breaks even with a gasoline vehicle at about 33 000 km (Figure B7.2). For an Autogas conversion, which is estimated to cost around €2 000 on average, the breakeven distance is slightly higher, at 37 000 km. Thus, a typical motorist can pay back the upfront additional cost of an Autogas vehicle within about two years.