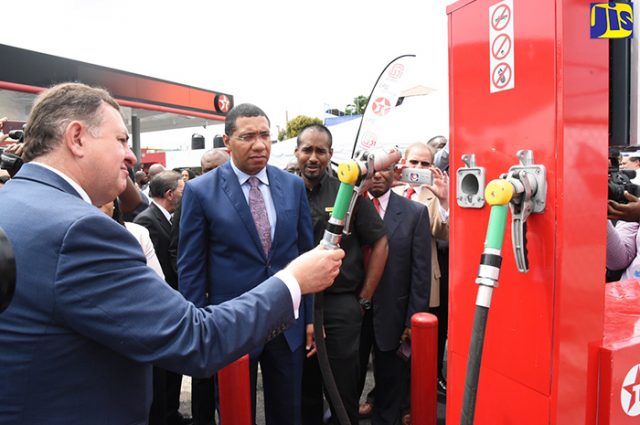 GB Energy Jamaica is preparing for a full Autogas roll-out that at its Texaco network in partnership with Jamaican start-up Tecnigas, which specialises in LPG vehicle conversion as well as the distribution of LPG parts for industrial and commercial use, and has opened the first Autogas station in St. Andrew.

Prime Minister Andrew Holness participated in the opening and commended this type of private alliances that “will boost Jamaican economy.” “In the new model for growth for Jamaica, the reliance cannot be on the Government to innovate and lead growth; it has to be the private sector,” he said.

Under the alliance with GB Energy, Tecnigas will convert the vehicles to run on LPG, while GB Energy will sell the fuel at its network. The fuel will initially be available at seven Texaco stations across Jamaica. The plan is to gradually install equipment to dispense the fuel at most of the 70 Texaco locations.

Holness commended the company “for taking the bold step” in launching the new LPG, which will benefit motorists across the island. “Jamaica welcomes GB’s initiative to supply and innovative the LPG product to the local energy market. We see the introduction of LPG as an innovative move that diversifies the options for our consumers,” he said.

Country Manager for Texaco Mauricio Pulido said that LPG is a cleaner fuel, which is more environmentally friendly and cheaper to the public than gasoline. He also explained that his company will be selling Autogas at between 40-50% cheaper than 90-Octane gasoline. On that basis, the payback on the installation of the LPG tanks for drivers would be 15-17 months.

CEO of Tecnigas Alex Hill added that his company will be setting up full-service LPG conversion centres, and informed that, based on assessments, they estimate that about 96% of Jamaican vehicles that run on petrol can do this conversion. For more information, please check these links.