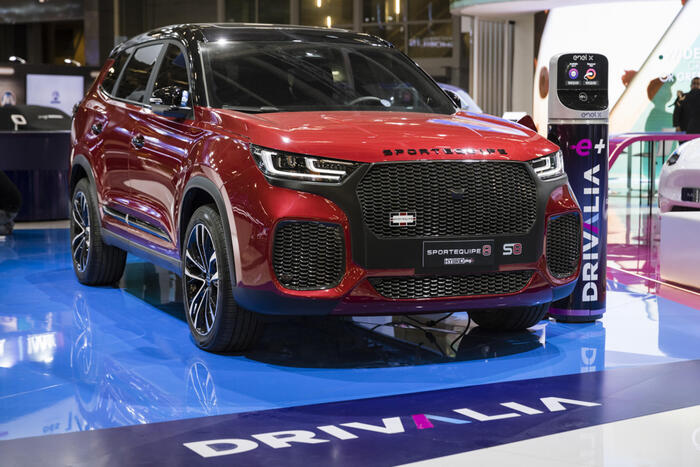 The Italian brand Sportequipe, belonging to the DR Automobiles Group unveiled the Sportequipe 8, a new maxi SUV with tri-fuel technology (electricity, petrol and Autogas) and record autonomy. It will become the most powerful and technologically advanced model of the group and its first car offering a plug-in hybrid system capable of running on LPG.

With a world premiere at the Paris Motor Show, the Sportequipe 8 is a 4.72-metre, 7-seater vehicle that features a sophisticated hybrid plug-in technology, capable of delivering a total of 320 HP with a maximum overall torque of 510 Nm and acceleration from 0 to 100 in 7 seconds.

The heart of Sportequipe consists of a 115 Kw 1.5 turbo petrol engine and two electric motors (one of 55 Kw, the other of 70 Kw). It also features a 19.27 kWh lithium-ion battery that allows a range of 100 kilometres in purely electric mode, one of the largest in its segment. If the petrol and LPG tanks are also used, the total range is almost 1,500 km.

During deceleration and braking, the Brake-by-Wire system transmits the vehicle’s kinetic energy to the engine via the propeller shaft and gearbox. In this way the mechanical energy is converted into electrical energy capable of recharging the battery pack. Then, the batteries are recharged even when the car is stationary, with the turbo engine running.