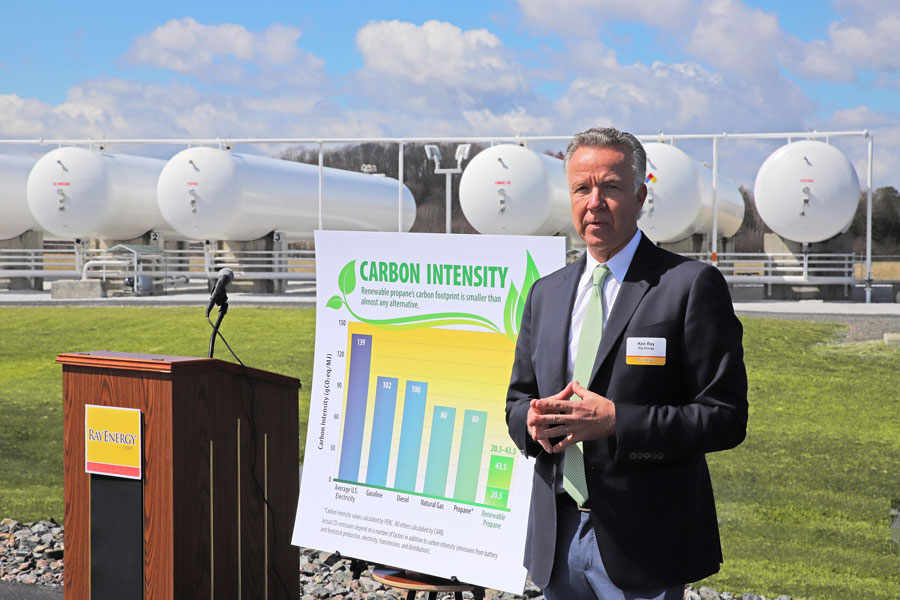 In a first for New York State and the Northeast, Ray Energy – a midstream wholesale LPG company- announced the arrival of 100% fossil-free, low-carbon, renewable LPG, providing a cleaner, alternative fuel to gasoline, diesel, and electricity. This biofuel is 100% sustainable, made of biomass and waste, and sourced and produced entirely in the United States, generating jobs, and reducing energy dependence on other countries.

“Sixty percent of the U.S. electricity supply is generated by coal and natural gas. Of that, the production of electricity generates the second largest share of GHG emissions,” said Ken Ray, President of Ray Energy. “We continually look for innovative products and technology solutions that improve energy efficiency, performance, and lower emissions. Renewable LPG addresses those issues,” said Ken Ray, President of Ray Energy, during the event held at the company’s rail and truck LPG terminal in Hampton, New York.

Ray Energy’s showcase in Hampton also promoted bioLPG use as a vehicle fuel, as it displayed an Autogas-fuelled dump truck, bobtail and pickup trucks. When used as a vehicle fuel, renewable Autogas has a carbon intensity of 19%, which is five times better than conventional diesel and gasoline, and less than half the carbon intensity of electricity. At the point of combustion, renewable LPG is carbon neutral, making it much cleaner than other energy sources.

Since the chemical makeup of renewable LPG is the same as conventional LPG (with the same output), it is compatible with existing LPG installations; there is no need to change out or modify vehicle engines, tanks, or heating systems. For more information, please visit this link.