Despite federal and state efforts to encourage vehicle conversions and refuelling stations, sales of Autogas (known as propane) in the United States remain extremely small compared to the rest of the automotive-fuel market. Autogas consumption amounted to 183 000 tonnes in 2018, a rise of 3% (Figure B25.1). But Autogas still accounts for a mere 0.03% of total road-fuel sales – the lowest share of any of the countries surveyed in this report. Autogas demand has been rising strongly in the last few years, more than doubling since 2011. High pump prices of Autogas relative to conventional fuels for non-commercial end users is the main reason for the very low market penetration of Autogas, though tax credits are available in some states to lower the cost of fuel purchases and vehicle conversions or OEM purchases. 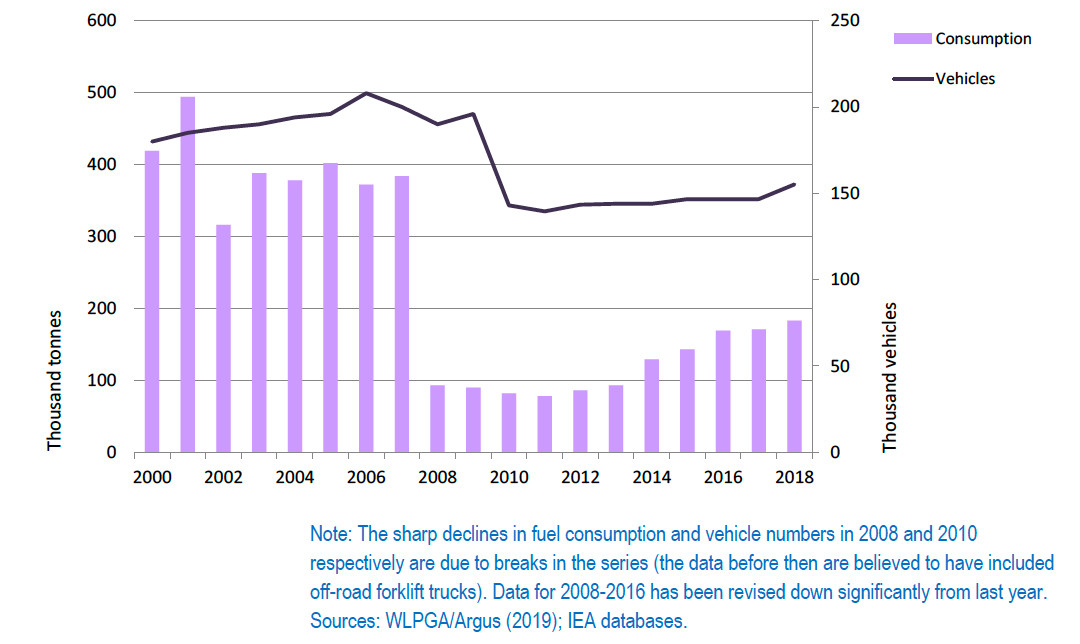 There are currently an estimated 155 000 road vehicles, mostly fleet vehicles, operating on Autogas across the United States – 0.1% of the total US car and truck fleet. The fleet expanded by 5.7% in 2018. Several OEM Autogas vehicles are available, including seven LDVs,1 and several new vehicle platforms are under development, including medium- and heavy-duty trucks and school buses.2 Manufacturers include Alliance AutoGas, Blue Bird Corp, CleanFuel USA, Collins Bus, Icom North America, Impco Technologies, Roush CleanTech and Freightliner. Market penetration is highest in the school-bus segment, with around 3% of all such buses running on Autogas. A total of 830 public and private operators currently operate more than 15 000 buses nationwide. Most other Autogas vehicles are in commercial and public fleets.

There are very few private non-commercial Autogas vehicles, because of the relatively high cost of the fuel compared with gasoline, diesel and CNG, and the high cost of conversions. A tightening of regulations by the Environmental Protection Agency (EPA) has led to a reduction in the number of conversion kits available on the market and an increase in the prices of OEM vehicles.3 Installing a conversion kit typically costs at least $4 000, while OEM Autogas versions of pick-ups and vans cost around $6 000 to $10 000 more than a standard gasoline-powered vehicle (for example, the Ford F-150, Dodge Ram 2500 HD and Chevrolet Express 2500). At end-2018, there were 3 800 refuelling stations selling Autogas across the United States.

The relatively low price of natural gas that has resulted from the boom in shale gas production in recent years has boosted interest in natural gas (CNG/LNG). The overall CNG/LNG fleet has grown to 175 0004 and is projected to grow further if gas prices stay low. Sales of EVs are also rising quickly as the performance of new models improves, production expands and prices drop.

There are a number of federal, state and local government incentives to encourage the supply and use of Autogas. These are summarised below. More details can be found at the web site of the Alternative Fuels and Advanced Vehicles Data Center run by the US Department of Energy (DOE): www.afdc.energy.gov/fuels/laws/LPG/US.

Rates of federal fuel taxes have not changed since 1993; the excise duty on Autogas, at 3.6 US cents/litre (13.5 cents per gallon), is lower than that on gasoline (4.9 cents/litre) and on diesel (6.4 cents/litre), though the differences are much smaller in energy-value terms. Alternative fuels, including Autogas, that are used for certain purposes, including farming, some types of local bus services, school buses, non-profit educational services and by state governments, are fully exempt from federal fuel taxes. States also levy taxes at varying rates on transport fuels. Pre-tax Autogas prices fell much less than those of gasoline and diesel between 2014 and 2016, with a sharp drop in the supply of natural gas liquids in the United States as shale-gas production fell back in the wake of the collapse in international oil prices. But the price of LPG rose much less than that of gasoline or diesel in 2017-2018 as gas production expanded once again. The average price of Autogas at the pump in 2018 (including state taxes) for non-commercial users was 8% lower than that of gasoline and 12% lower than that of diesel in per-litre terms – the first time since 2014 that Autogas prices were lower (Table B25.1). But in energy-content terms, Autogas prices are still higher than both the other fuels. 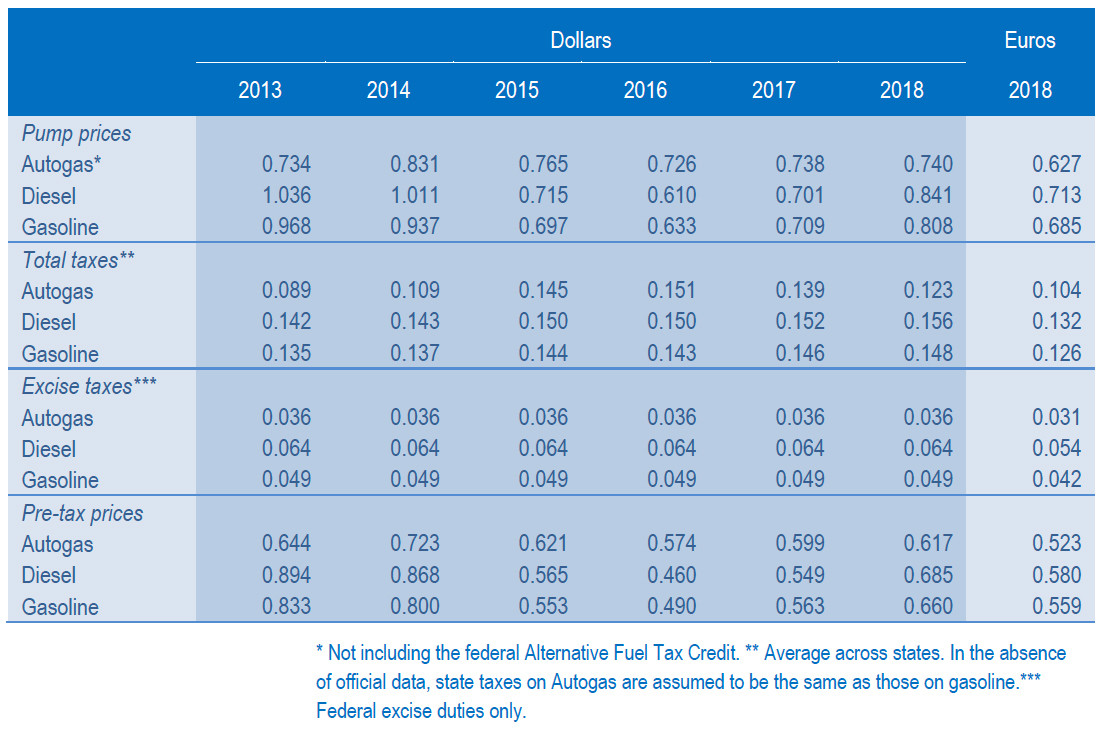 In practice, the prices paid by most end users may be considerably lower than those reported in Table B19.1, which are compiled from data published by the DOE Clean Cities Program – the only published source of data on retail Autogas prices in the United States.1 There is evidence that these prices may overstate the actual prices paid by consumers, especially non-commercial Autogas users. A report prepared by ICF International on behalf of the National Propane Gas Association (NPGA), released in March 2012, found that the price of Autogas is actually significantly lower than that of gasoline (ICF, 2012). In addition, commercial and public fleets reportedly pay much lower prices as they are able to negotiate sizeable discounts.

In addition, effective Autogas prices were lower for most users up to the end of 2017 thanks to the Alternative Fuel Excise Tax Credit. The credit, which had been in place for several years, expired on 31 December 2016, but was reinstated in early 2018 and made retroactive to the end of 2017. The credit which effectively reduces the pump price by the same amount, stood at 50 cents/gallon (13.2 cents/litre) up to 2015, but was reduced to 36 cents (9.5 cents) in 2016 and 2017. It was available for any alternative fuel, including Autogas, and for any entity retailing or using Autogas (a private citizen, bulk fuel retailer, company or state/local government) registered with the Internal Revenue Service. The US LPG industry has called for the credit to be reinstated; a bill that would retroactively apply the previous credit from 2018 to 2020 is expected to be adopted before the end of 2019.

There are several federal programmes, regulations and incentives in place to encourage alternative fuels, including Autogas.1 The main form of federal support for Autogas is alternative vehicle acquisition and fuel-use mandates. Under the Energy Policy Act of 1992, 75% of new LDVs acquired by certain federal fleets must be AFVs; Autogas was classified by the Act as an alternative fuel. Federal fleets are also required to use alternative fuels in dual-fuel vehicles unless the DOE determines an agency qualifies for a waiver; grounds for a waiver include the lack of alternative fuel availability and cost restrictions. The 1992 Act also requires certain state government and alternative fuel provider fleets to acquire AFVs. Additionally, Executive Order 13423, issued in January 2007, requires federal agencies with 20 vehicles or more in their US fleet to reduce petroleum consumption by 2% per year, relative to their Fiscal Year (FY) 2005 baseline, through to FY 2015. Agencies must also continue to increase their alternative fuel use by 10% per year, relative to the previous year.

Executive Order 13514, issued in October 2009, and the Energy Independence and Security Act of 2007, introduced additional requirements for federal fleets to acquire vehicles with low greenhouse-gas emissions, favouring Autogas and other AFVs. Executive Order 13693, issued in March 2015, also requires federal agencies with 20 vehicles or more to improve fleet and vehicle efficiency through the elimination of non-essential vehicles and achieve a 30% reduction of fleet-wide GHGs relative to FY 2014 emissions baseline by FY 2025.

The federal government also runs a number of programmes that encourage the use of alternative fuels. One of the most important is the Clean Cities Program, which supports local public/private initiatives to promote the deployment of AFVs and reduce conventional fuel consumption in urban areas.2 In 2011, President Obama announced the creation of a National Clean Fleets Partnership, run by the DOE, under which more than 20 000 advanced technology vehicles, including Autogas vehicles, are to be deployed.3 Clean School Bus USA provides funding for projects designed to retrofit and/or replace older diesel school buses with AFVs; Autogas accounts for a large WLPGA/Liquid Gas Europe 140
number of the buses that have been converted under this programme.4 The Propane Education and Research (PERC), set up under a 1996 law and funded by the LPG industry, helps coordinate efforts to promote the use of propane as an alternative fuel. The Propane Education and Research Enhancement Act of 2014 expanded PERC’s duties by tasking the council with developing training programs to reduce the effects of future Autogas price spikes for distributors and consumers.

In early 2018, Congress extended retroactively the Alternative Fuel Infrastructure Tax Credit until the end of 2017. The credit covers up to 30% of the cost of installing refuelling facilities for alternative fuels, including Autogas, up to a limit of $30 000. Federal grants are no longer available for Autogas vehicle purchases or conversions.

Most US states make available additional fiscal and other incentives to support the use of Autogas and other alternative fuels, including grants and loans for vehicle conversions and purchases, as well as refuelling infrastructure. For example, Louisiana offers an income tax credit of 36% of the cost of converting a vehicle to operate on an alternative fuel, the incremental cost of purchasing an original equipment manufacturer AFV, and the cost of alternative fuelling equipment.5 Alternatively, a taxpayer may take a tax credit of 7.2% of the cost of the vehicle, up to $1,500. The Ohio Environmental Protection Agency launched a new $5 million programme in 2018 to provide grants to owners of diesel or gasoline-powered trucks and buses to convert to alternative fuels, including Autogas. In Texas, a grant of up to $7 500 per vehicle is available to private, non-profit, local government, state, and school fleets to cover the incremental cost of switching to Autogas, limited to $30 000 per fleet.6 In addition, the Texas Commission on Environmental Quality announced in early 2018 $6.2 million of funding for replacing or converting polluting school buses, with Autogas being one option.7 Also, the Texas Light Duty Motor Vehicle Purchase or Lease Incentive Programme provides rebates to purchasers or leasers of alternative fuel vehicles, including those using Autogas, with total funding of $7.7 million to May 2019.8

Some states also have AFV purchase mandates in addition to those under federal laws. In some states, tax rebates and exemptions are also applied to Autogas. For example, in California, Autogas is exempt from the state excise tax of 6 cents per gallon when the vehicle owner pays a flat-rate sticker tax ($36 per year for a LDV weighing less than 4 000 lbs).9 The Alternative and Renewable Fuel and Vehicle Technology Program, administered by the California Energy Commission, provides financial incentives for developing and deploying alternative and renewable fuels.10 Some states grant exemptions from parking restrictions, discounts on parking fees and access to high-occupancy vehicle lanes for AFVs.

At reported prices for non-commercial end users, Autogas struggles to compete with either gasoline or diesel regardless of distance travelled, even allowing for the federal Alternative Fuel Tax Credit (that may be retroactively applied from 2018) and any vehicle-related grants. This is essentially because of low federal and state taxes on all automotive fuels and the relatively high wholesale price of propane; Autogas could not compete even if there were no excise taxes on the fuel (Figure B25.2). Nonetheless, Autogas may be competitive in states where pump prices are lower and vehicle incentives are available. Diesel is generally a more competitive alternative to gasoline, though its breakeven distance is very high, at around 200 000 km (which explains why diesel is not a very popular alternative to gasoline in the United States). 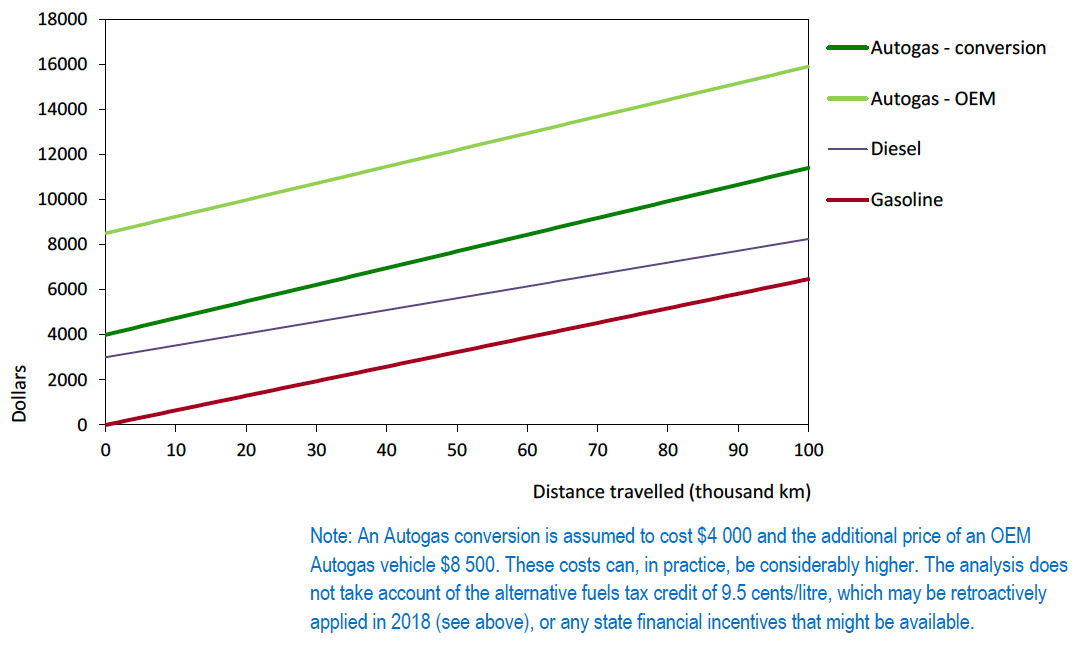 Autogas appears to be much more competitive for commercial and public fleets, such as school buses. For example, based on average industry-reported prices for 2018 that include sizeable discounts,1 Autogas would break even with gasoline at around 100 000 km in the case of an aftermarket LDV conversion costing $4 000 and a vehicle subsidy of $2 000, making it an attractive option for high-mileage vehicles.

This analysis demonstrates very clearly why Autogas has failed to make major inroads into the non-commercial road-fuel market in the United States and the crucial role that mandates will need to play in encouraging switching to the fuel in the absence of fuel-tax and vehicle incentives. The price of natural gas and investments in refuelling infrastructure for CNG will also have an important impact on how well Autogas is able to compete against that fuel. At present, CNG is the cheapest of all the available fuels in the United States for non-commercial end users on an energy-equivalent basis (Table B25.2).