The Autogas market in the United Kingdom emerged at the end of the 1990s and grew rapidly until the mid-200os in response to a concerted policy push by the government and investment by Autogas suppliers, car manufacturers and technology providers. Autogas consumption peaked at 120 000 tonnes in 2008 (Figure B24.1). Following a rise in excise duty, which pushed up the price of the fuel at the pump substantially relative to gasoline and diesel, and a reduction in grants in for the purchase of OEM vehicles and aftermarket conversions, the market began to contract, with fuel sales falling to just 59 000 tonnes in 2017 – a fall of 13%. Autogas now meets just 0.2% of the country’s road-fuel needs. The consumption of other unblended alternative fuels is minimal, though sales of electric vehicles are starting to rise, in part thanks to fiscal incentives.

There are a total of 110 000 vehicles in the United Kingdom that are able to run on Autogas, down from a 120 000 the previous year and a peak of 170 000 in 2011. Sales of OEM Autogas vehicles have dried up completely as none of the major carmakers that market Autogas models import them any longer, but there are still several companies that install conversion kits and around 200 UKLPG approved installers.1 A robust vehicle certification and tracking system has been introduced. Interest in Autogas and hybrid Autogas conversion technologies has picked up recently with rising concerns about the adverse impact of diesel vehicles on urban air quality. There were 1 150 refuelling stations selling Autogas across the country at end-2018 – 100 fewer than a year earlier.

[1] https://www.uklpg.org/about/lpg-as-a-transport-fuel. UKLPG is the UK trade association for the LPG industry.

The main form of support for Autogas from the central government is a reduced rate of excise duty. In his 2013 Autumn Statement, the Chancellor of the Exchequer announced a 10-year commitment that the difference between the duty on Autogas on the one hand, and that on gasoline and diesel on the other, will not be reduced by more than 1 pence per litre per year to assure consumers that the government continues to support the fuel and that their investment in converting to Autogas will not be lost. In fact, the differential has remained constant at 41.9 pence, with the duty on Autogas amounting to 16.1 pence since 2012 (Table B24.1). As a consequence, the pump price of Autogas in 2016 was just 57% of the price of gasoline and 55% that of diesel. The pump price of Autogas fell sharply in 2016, due to weak wholesale prices, and has increased only moderately since, widening significantly the price gap with the other two fuels. 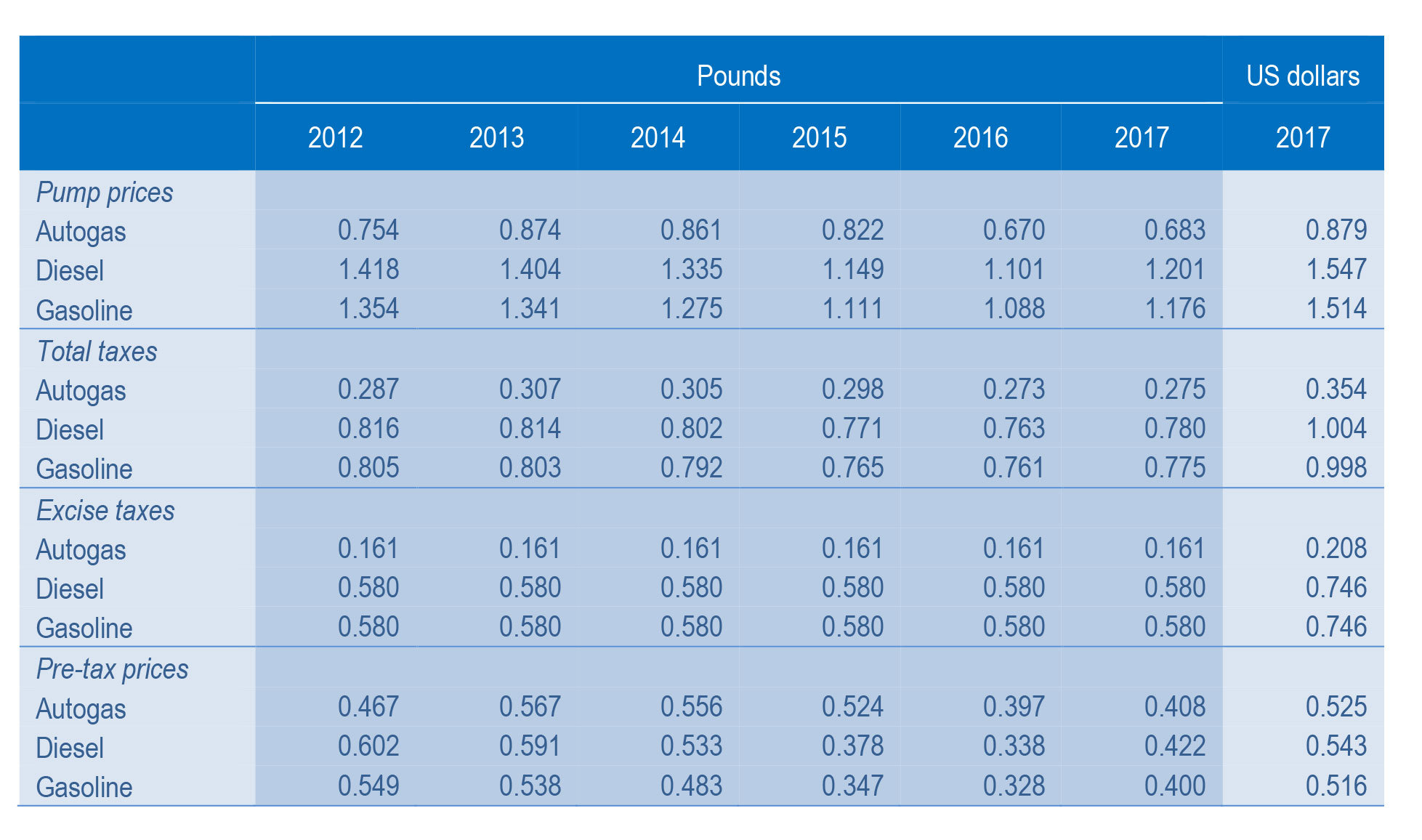 The tax advantage of Autogas and other alternative fuels has recently been extended. In the Autumn Budget, delivered on 30 October 2018, the government announced that it will maintain the difference between alternative and main road fuel duty rates until 2032 to support the decarbonisation of the UK transport sector, subject to review in 2024. As a result, the duty paid on alternative fuels will remain 50% lower than diesel for the next 14 years.

The only other fiscal incentive for Autogas is a small discount of £10 ($13) or £25 ($33) depending in vehicle size on the annual road tax for Autogas vehicles converted by a UKLPG approved installer.

Other initiatives to encourage Autogas are in place at the local level. In London, the transport authority, Transport for London, has accepted to extend the life of a black cab by five years if it is converted to Autogas (and complies with Euro-6 standards) in order to operate within the ultra-low emission zone (ULEZ) – an area of central London within which vehicles all vehicles will need to meet exhaust emission standards by 2020 or pay a daily charge to travel. At present, Euro-5, Euro-4 and Euro-3 taxi operators have to retire their vehicles at 12 years. From 2018, all newly licensed taxis and private hire vehicles have had to meet the new emission standards.1 In addition, in December 2018, the Mayor of London doubled to £5 million ($6.7 million) the existing £2.5 million ($3.3 million) grant funding for repowering London TX4 Euro-5 taxis to Autogas and announced plans to invest an extra £24 million ($32 million) to help more black-cab taxi drivers switch to alternative fuel vehicles.

Clean Air Zones, affecting commercial vehicles only, are due to be introduced in five other UK cities –Birmingham, Leeds, Nottingham, Derby and Southampton – by 2020. In these zones, all Autogas vehicles that comply with Euro-6 standards will be exempt from any charges.

The UK government published in July 2017 an Air Quality Plan, which is predominantly aimed at reducing NOx emissions in urban areas. Under the plan, a new Clean Air Fund was set up to provide funding for local authority initiatives, such as retrofitting buses to run on alternative fuels, including Autogas. A total of £220 million ($290 million) of funding has been allocated by the government for the period 2018-2021.2 In addition, the government has launched a consultation process to determine a Clean Air Strategy. Possible measures include the introduction of special incentives for vans to switch to cleaner fuels like Autogas.

In 2018, the UK government issued a paper called The Road to Zero3, which identifies Autogas as a credible alternative to diesel in urban driving conditions and proposes measures to unlock investment in this technology. The UK Low Carbon Vehicle Partnership also launched the Clean Vehicle Retrofit Accreditation Scheme, which includes the LPG option4.

A converted Autogas LDV breaks even with an equivalent gasoline-powered vehicle at around 52 000 km – or three to four years of driving for a typical private motorist – based on an average conversion costs of about £1 500 ($2 000) and average 2018 fuel prices (Figure B24.2).

Diesel breaks even with gasoline at 78 000 km but is never competitive with Autogas, assuming that a new diesel vehicle costs £1 500 more than a gasoline one. This analysis suggests that Autogas is a more attractive option for high-mileage vehicle owners, such as fleet operators, than diesel, especially in view of the likelihood of new measures to discourage the purchase and use or diesel for air quality reasons.