Autogas use in Ukraine has grown spectacularly in recent years in response to extremely favourable pump prices, helped by low taxes, and the low cost of converting gasoline cars to run on both fuels. Consumption reached an estimated 1.64 million tonnes in 2018 – a rise of 8% compared with 2017 and more than twice the level at the start of the decade (Figure B23.1). Official data show much lower consumption, but not all suppliers file reports of retail sales and some include them in their wholesale figures to avoid paying excise tax.1 Autogas accounts for well over one-fifth of all road-fuel sales and 90% of total LPG use in Ukraine. Another factor that is reportedly boosting the use of Autogas is the substantial damage to infrastructure caused by the conflict in eastern Ukraine, which has disrupted the distribution of fuels by pipeline; Autogas is proving easier to distribute, since it only needs tanker trucks.2
[1] Argus LPG World, 4 January 2017.
[2] https://auto-gas.net/mediaroom/ukrainian-drivers-switch-to-alternative-fuels/ 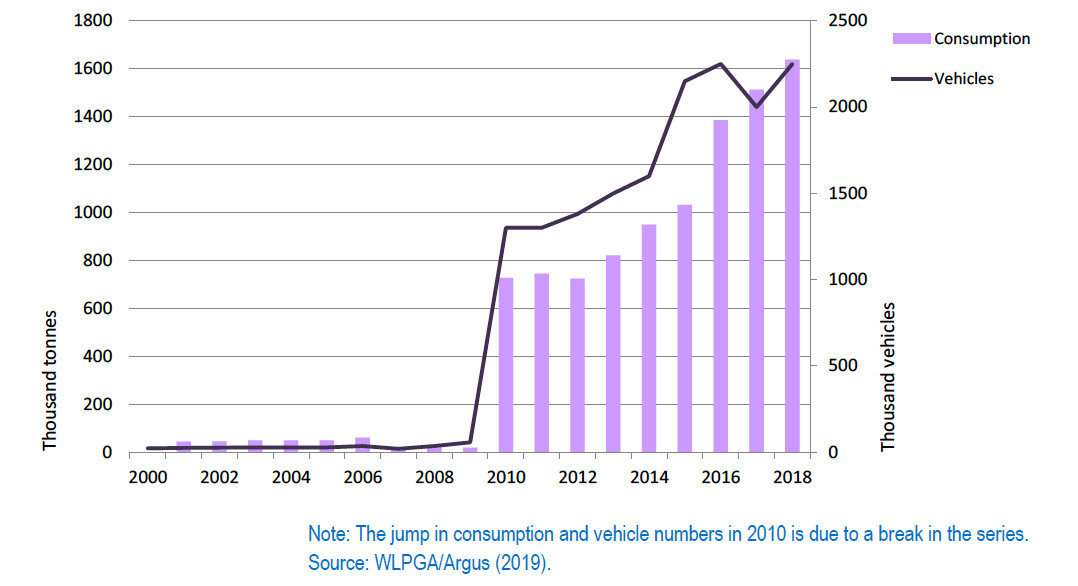 The Autogas fleet is continuing to expand rapidly, driving higher consumption. By end-2018, there were an estimated 2.25 million Autogas-enabled cars in use in Ukraine – close to a quarter of all vehicles on the road. Most of them are converted gasoline-powered cars, including many from the 1980s and 1990s, both locally made, such as ZAZ, and imports from Western Europe. A few OEM Autogas cars are imported into Ukraine. Autogas is widely available at filling stations in cities and along major routes, as well as at a few dedicated Autogas stations. In total, there were around 5 000 stations selling Autogas throughout the country at end-2018 – up from 3 000 four years earlier.

The only government measure in support of Autogas is a very low rate of excise duty compared with gasoline and diesel. In 2018, the tax averaged 0.97 hryvnia per litre, compared with 3.19 for diesel and 4.25 for gasoline (Table B23.1). Duties on all three fuels have been rising in recent years, but the tax on Autogas has remained much lower. Taking account of sales taxes, the price advantage of Autogas at the pump in absolute terms has been steadily growing in recent years. The low duty, together with low wholesale prices, results in a highly attractive price of Autogas at the pump: it averaged 13.2 hryvnia in 2017 – 54% lower than that of gasoline and 50% below that of diesel. 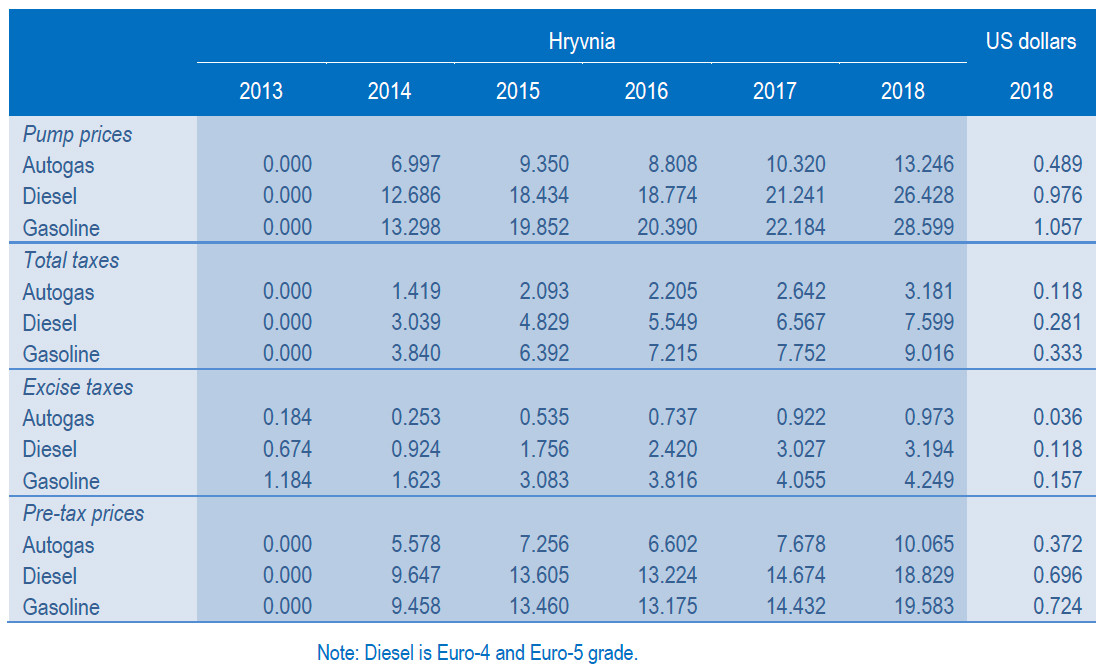 Unsurprisingly, the low price of Autogas vis-à-vis gasoline results in a very low break-even distance – just 22 000 km for a converted vehicle or little more than one year of driving for a private motorist, assuming a typical conversion cost of 18 000 hryvnia (about $670) (Figure B23.2). An OEM vehicle breaks even at 28 000 km assuming a price premium of 22 500 hryvnia ($830). Autogas is always more competitive with diesel regardless of distance as per-km fuel costs are lower and the price premium for a diesel vehicle is generally higher. This analysis demonstrates very clearly why Autogas demand is rising so strongly in Ukraine.