Thailand’s Autogas market has been on a roller-coaster ride over the last decade and a half, with shifting policies and uncertainty over future policy direction. Sales were flat at around 200 000 per year over the first half of the 2000s, but then took off in 2005 in response to a sudden widening of the already favourable price gap between Autogas on the one hand and gasoline and diesel on the other – part of a new government strategy aimed at reducing pollution in major urban centres. Sales dropped sharply in 2010, but then rebounded to a peak of almost 2 million tonnes in 2014, rising by a remarkable 710 000, or two-thirds, in 2013 alone (Figure B21.1). They have since fallen heavily, to just 1.17 million tonnes in 2018 with higher prices. Autogas now accounts for less than 5% of total road-transport fuel sales – down from over 9% in 2014. 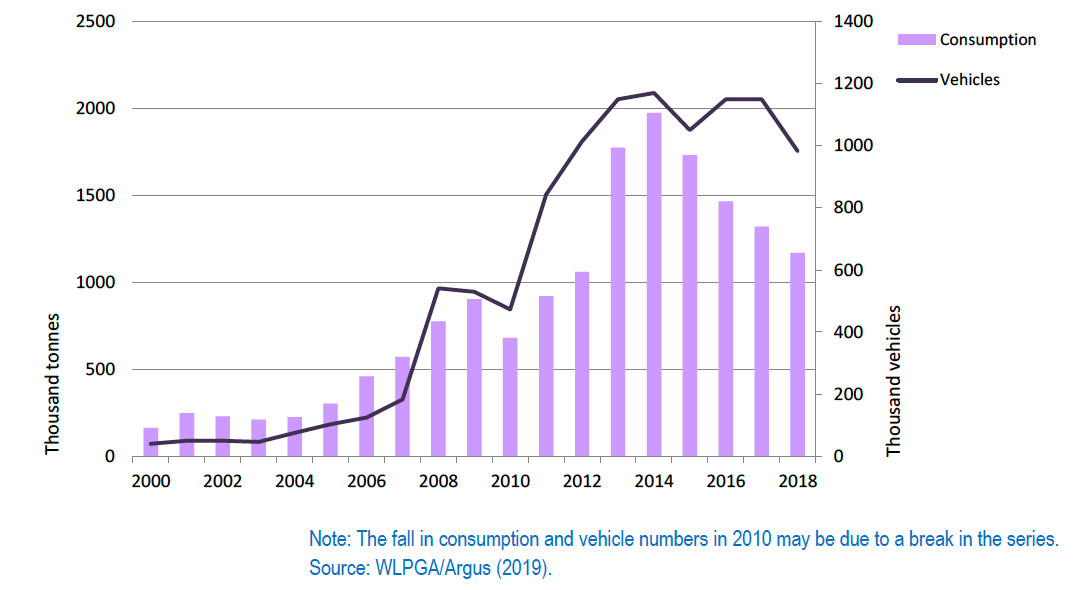 The number of vehicles running on Autogas grew rapidly after 2003 to 1.15 million in 2014, but declined to just over 980 000 in 2018 – roughly 5% of all the cars and trucks on the road in Thailand. The growth in the Autogas fleet was originally driven by taxis and motorised rickshaws, but private passenger cars accounted for a bigger share of vehicles that were added to the fleet in recent years. Virtually all the Autogas vehicles in use in Thailand are converted gasoline cars; no OEM Autogas models are marketed in Thailand. The recent contraction in the Autogas fleet is largely due to switching to ethanol (see below). At end-2018, there were an estimated 1 850 refuelling stations selling Autogas, most of which are in or around Bangkok.

Thailand’s oil market was largely deregulated in 1991, but the government still caps the wholesale and retail prices of LPG for social reasons, using an oil stabilisation fund to balance differences in the ex-refinery prices (which are deregulated) and wholesale prices. The retail price of Autogas, which used to be same as that of LPG sold in cylinders, remained unchanged between 2008 and 2011. The price then rose, narrowing slightly the gap with those prices of gasoline and diesel. The regime that came to power after the coup in 2014 has shifted most of the remaining subsidies from the oil fund away from LPG and towards two ethanol blends (Gasohol E20 and E85) produced locally (LPG was more heavily subsidised than other transport fuels). A small subsidy on LPG at the same rate for all sectors remains in place. Since January 2015, in order to better reflect the cost of supply, the government sets a uniform LPG wholesale price for all sectors based on a weighted average of market prices (IEA, 2017b). Since then, the price gaps between Autogas and the two other fuels have been broadly stable. CNG prices were completely deregulated in 2016 and subsidies removed. 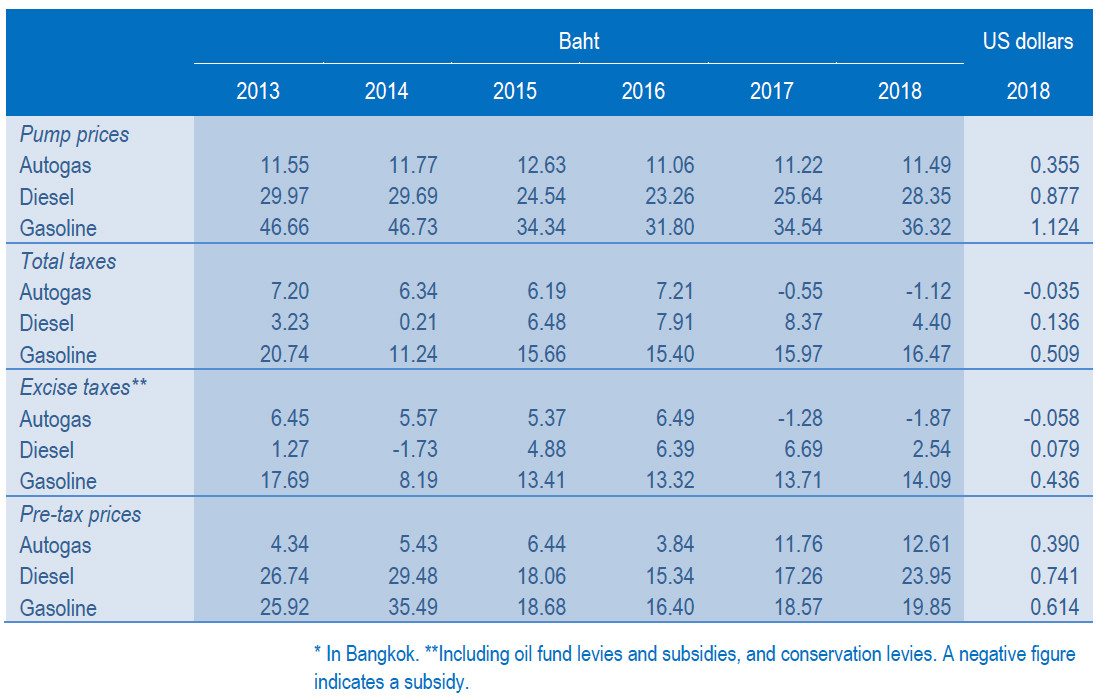 The average pump price of Autogas in 2018 was less than a third of that of gasoline – the lowest rate of any of the countries surveyed in this report – and 41% of that of diesel (Table B21.1). All automotive fuels, including Autogas, are subject to an excise tax, a conservation fund tax and an oil stabilisation levy (or subsidy). Overall, these taxes are still lower for Autogas than the other two main transport fuels (indeed, Autogas was subsidised in 2017 and 2018). There are no subsidies for vehicle conversions.

The previous government had been encouraging motorists to switch to CNG rather than Autogas, partly as a way of reducing the overall cost of subsidies to LPG. This led to a rapid increase in CNG consumption alongside the expansion of the Autogas market: by 2017, CNG consumption was more than a quarter higher than that of Autogas in energy terms. But demand for CNG, like that for Autogas, has been falling (by 25% between 2014 and 2017) in response to a sharp increase in the pump price. The new government is promoting switching instead to ethanol blends, to support the large sugarcane sector in Thailand. Production and consumption of ethanol has been growing at double-digit rates in the last few years. The low prices of the subsidised ethanol blends (see below) is boosting demand for ethanol as a transport fuel: sales of gasohol increased 46% between 2014 and 2017. The government is also looking to promote EVs; several charging stations have been installed in Bangkok, though the number of plug-in and battery EVs remains negligible for now.

Despite recent price increases, the pump price of Autogas remains low enough to make the fuel competitive with diesel and price results in a breakeven distance for a typical passenger car converted to run on Autogas against gasoline of around 18 000 km (Figure B21.2). This analysis assumes a conversion cost of 30 000 baht (roughly $900). Diesel breaks even with gasoline at a distance of 43 000 km (assuming a premium of 50 000 baht, or around $1 500, for a diesel car over a gasoline car), but as the running costs for Autogas cars are lower than those for diesel cars, Autogas is always more competitive.

Although Autogas remains competitive with conventional fuels, it has lost ground to ethanol, the prices of which have fallen significantly compared with Autogas. In 2018, the price of E85 in Bangkok averaged 20.88 Baht/litre and that of E20 26.22 Baht. Adjusting for differences in mileage (which vary a lot depending on the vehicle and the conversion kit), the price of E85 in many cases is only slightly higher than that of Autogas. As the cost of installing an ethanol conversion kit to enable a gasoline car to run on all blends of ethanol and gasoline is even lower than that for Autogas (since there is no need to install a separate fuel tank), ethanol is now often preferred to Autogas where available, which explains the recent slump in Autogas sales.