Spain has a very small Autogas market, but it is expanding rapidly in response to a substantial fiscal incentive and various national and local initiatives to promote the take-up of the fuel for environmental reasons. Consumption of the fuel had dwindled to little more than 10 000 tonnes by the mid-2000s, but has since risen steadily, reaching just over 60 000 tonnes in 2018 (Figure B20.1) – accounting for around 0.2% of total use of automotive fuel in the country. 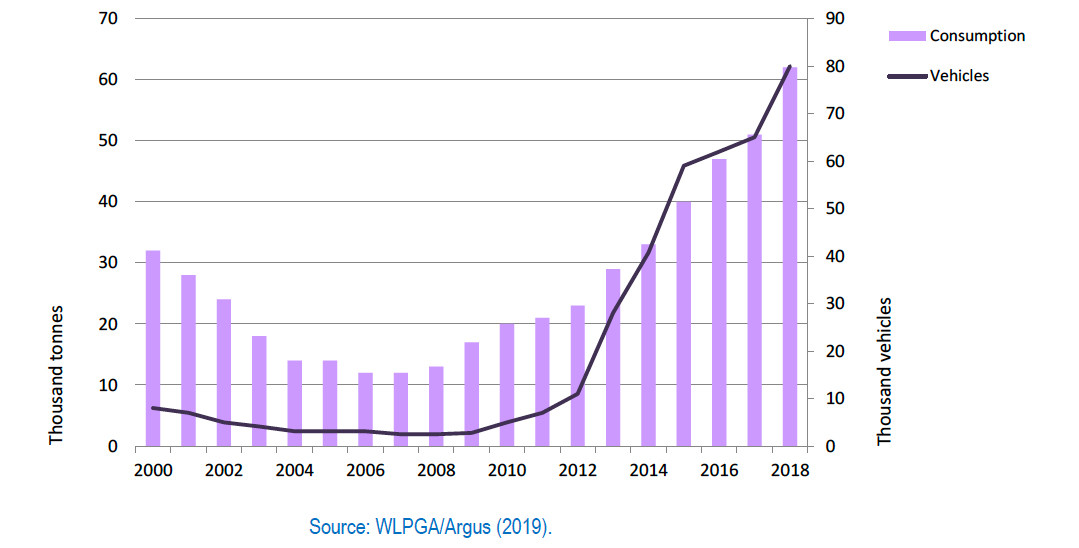 The rise in Autogas use has been driven mainly by a jump in OEM vehicle sales. At the end of 2018, there were an estimated 80 000 Autogas vehicles in use, up from just 3 000 as recently as 2009. Official data point to an increase of more than 17 000, or fivefold, in Autogas registrations in 2018.1 One reason for the increase in interest in Autogas is that such vehicles qualify for the ECO label alongside hybrids and CNG/LNG vehicles, allowing them to be used on high-pollution days in major cities (see below) and to benefit from lower car taxes.2 Until recently, most Autogas vehicles in use were conversions. However, a growing number of carmakers now sell OEM Autogas models. At present, 14 carmakers – Alfa Romeo, Dacia, Fiat, Ford, Opel, Piaggio, Renault, Ssangyong, Subaru, Citroën, Peugeot, Suzuki, Mercedes and DFSK – market around 30 Autogas LDV models. In addition, there has been an increase in so-called “phase II” conversions or “delayed OEMs”, whereby new vehicles are sent directly by the OEM (excluding Opel) to an associated workshop which handles the conversion and the paperwork. A number of different conversion kits are available, mostly from Italian-based companies, including Tartarini, Landi Renzo, BRC, Icom, GFI, Imega, Lovato, LiquidSi (Vialle) and Stefanelli. Conversions must be inspected before a Road Permit (Permiso de Circulación) can be issued.

The number of refuelling sites that sell Autogas is also on the rise, numbering 1 100 at the end of 2018. Repsol, which operates two-thirds of these sites, plans to expand the number of its stations selling Autogas to 1 000 by 2020.3 According to a recent study by the Spanish Association of LPG Operators, the refuelling network is able to meet the demand of five times the current fleet of vehicles that use it.4

The principal form of policy support for Autogas, as in most other countries, is a relatively low excise tax on the fuel. Up to 2011, Autogas was exempt from excise tax. A tax of 3.2 euro cents/litre was introduced in 2012 and has not changed since (Table B20.1). Since 2017, the same tax is 46.1 cents on gasoline and 36.7 cents on diesel. The tax on those fuels increased by almost as much as the amount for Autogas in 2012, so the introduction of the tax on Autogas did not have any significant effect on the fuel’s competitiveness. Combined with a lower wholesale price, the favourable excise tax results in a relatively low price of Autogas at the pump. In 2018, it averaged 68 cents/litre – 44% lower than the price of diesel and 47% lower than that of gasoline. In absolute and relative terms, these price differentials have changed very little in recent years.

To date, other central government measures aimed at encouraging Autogas have been largely limited to periodic incentives for clean transport generally. The Ministry of Economy, Industry and Competitiveness reaffirmed its support for Autogas in 2017 and launched a new plan, called MOVEA, to promote clean vehicles. The budget for 2017 was €1.5 million, to be used in part to fund grants of up to €2 750 for vehicle conversions or OEM purchases.1 The plan was superseded by another, called MOVALT, in 2018, with the budget increased substantially to €20 million.2 A further increase to €67 million was allocated for 2019.3

Another important measure that increasingly favours Autogas concerns traffic restrictions. In early 2017, the General Transit Authority (DGT) started to implement a vehicle-labelling system based on emissions, which (as in some other European countries) provides a legal basis for local traffic regulations related to air quality. Under the system, battery EVs are classified in the “zero emissions” category; Autogas, hybrid and CNG/LNG vehicles are classified in the “ECO” category just below, and vehicles that meet Euro-6 standards to a “C” category. Municipal authorities may restrict or prohibit the entry in densely populated areas of certain vehicles according to their emissions category. For example, the municipal authorities in Madrid, in the event of severe pollution, may ban all vehicles from entering the central area of the city other than “ECO” and “zero emissions” vehicles. Barcelona plans to do likewise from 2020, as well as offering a discount to Autogas vehicles that park in the city’s central blue zone.4 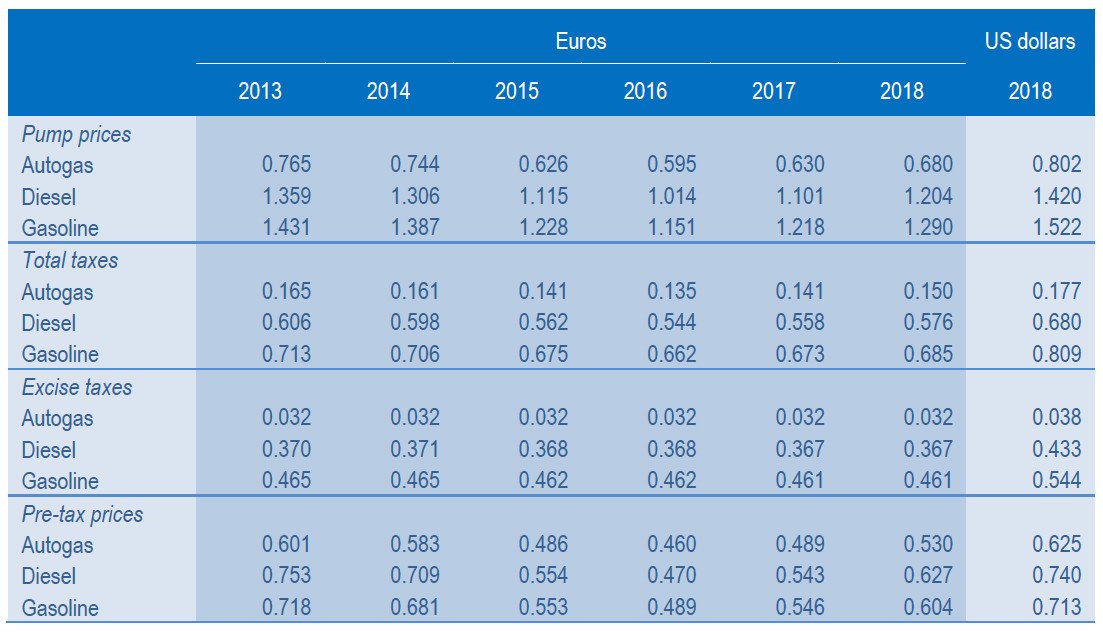 Regions and provinces also have programmes to support the uptake of Autogas and other alternative fuels. For example, in 2017, the city of Madrid launched a scheme to encourage the conversion of 1 000 private cars that run on gasoline to Autogas, whereby a grant of €200 per vehicle is paid to the owner of the vehicle and another €200 to the workshop where the conversion is carried out. It has also launched a Sustainable Urban Mobility Plan to promote the acquisition of AFVs, involving grants of up to €2 500 for Autogas and other ECO label vehicles. The government of the Castilla-La Mancha region plans announced in mid-2018 plans to allocate €500 000 in grants for converting vehicles to Autogas, natural gas or hydrogen or for installing alternative fuel refuelling equipment over the rest of 2018 and 2019.1 The government of the Balearic Islands has launched a scheme offering a grant of €800 to taxi owners to convert to Autogas; Repsol offered a voucher of the same value for purchasing fuel between March and June 2018 to boost interest in the scheme.2 The Castellon city council introduced a rebate of 75% on the annual car tax for 2019 for ECO label vehicles.3

The current structure of fuel prices makes Autogas highly competitive in Spain. Based on average 2018 prices, Autogas breaks even against gasoline at just 36 000 km for converted vehicle (based on an average cost of around €1 250) and 43 000 km for an OEM vehicle (based on an average price premium of €1 500) (Figure B20.2). Diesel breaks even against gasoline at almost 90 000 km, but is never competitive with Autogas because of higher fuel costs and a higher vehicle price (around €1 00o more than an OEM Autogas car on average).