The Serbian Autogas market, until recently one of the most buoyant in the world, has recently contracted sharply. Fuel sales took off in the mid-2000s in response to a strong fuel-tax incentive. From almost zero in 2004, they reached close to 280 000 tonnes in 2011; they have dropped back considerably since then, reaching just 102 000 in 2018 (Figure B19.1). Autogas now makes up less than 6% of the road-fuel market (down from 16% in 2012) and 54% of total LPG consumption in Serbia – most of which is imported. Autogas is the only alternative fuel used to any significant degree in the country. 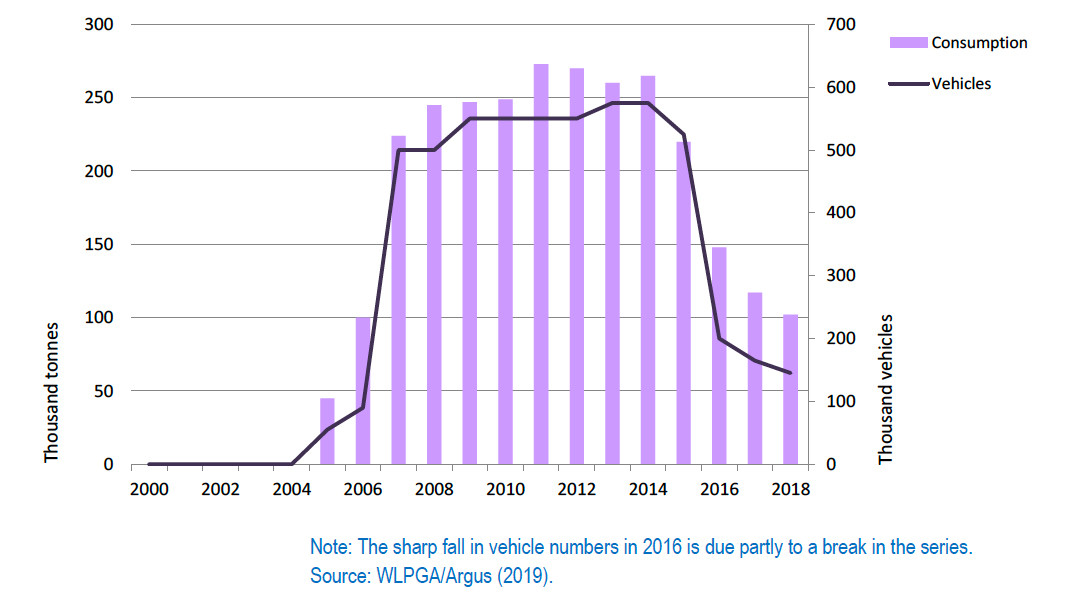 The initial run-up in Autogas use was driven by a rapid expansion in the fleet of vehicles able to run on the fuel. Most of that increase took place in just five years up to 2009. It started to contract in 2015, dragging down fuel sales. By end-2018, there were an estimated 145 000 vehicles in use (7% of the total fleet), many of them old gasoline cars dating back to the 1990s, which were easy and cheap to convert. These include locally made cars, such as Yugos, and imports from Western Europe. Most of the conversions kits that have been installed are from Italian companies, including Lovato and Tartarini. Over time, these cars are gradually being scrapped; as few new cars are being converted, the overall fleet is contracting. Autogas is still widely available throughout the country in urban areas and along major routes. At end-2018, there were 615 filling stations selling Autogas, some of them entirely dedicated to the fuel.

The principal policy incentive for Autogas in Serbia is a low rate of excise duty relative to that on the gasoline and diesel. In 2018, the duty averaged 22 dinars/litre (the official rate rose from of 41.65 to 42.90 dinars/kilogramme in mid-March), compared with 56.16 dinars for diesel and 54.62 dinars for gasoline (Table B19.1). This resulted in a pump price of Autogas that was just 50% that of diesel and 52% that of gasoline (two points lower than in 2017 for both fuels). The fall in the ratios in 2018 was because of a widening of the gap in wholesale prices (making LPG even cheaper on a per-litre basis), as well as because the excise duties on gasoline and diesel increased proportionately more than that on Autogas. Most of the excise duty on all three fuels is refundable for commercial users, including taxis and road hauliers.1 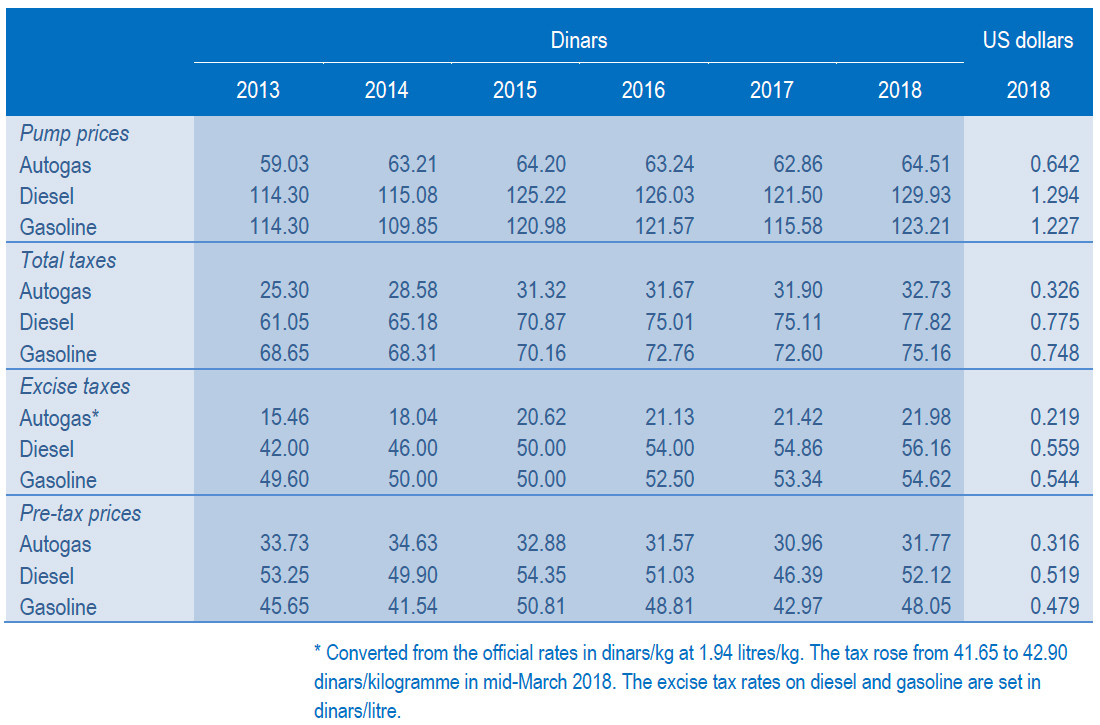 The low rate of excise duty and correspondingly low price of Autogas at the pump makes the fuel reasonably competitive with other road-transport fuels. Assuming the cost of converting a gasoline car to run on Autogas is around 140 000 dinars (about $1 300), the breakeven distance is 41 000 km – 3 000 km less than in 2017 (Figure B19.2). After 100 000 km, the cost saving (net of the conversion cost) is around 200 000 dinars ($2 000). The price premium of an OEM LPG car over gasoline version is generally about the same as the cost of conversion, so the breakeven distance is similar. The breakeven distance increased through to 2017, which many explain the dwindling interest in switching to Autogas. The high price of diesel, largely due to the large excise duty, means that the fuel is never competitive with Autogas and only breaks even with gasoline at well over 100 000 km.