The Portuguese Autogas market has been growing steadily over the last decade or so, but remains small both in absolute terms and relative to the size of the overall transport fuel market. Sales amounted to 36 000 tonnes in 2017 – unchanged since 2016, but an increase of two-thirds compared with 2007 (Figure B17.1). Autogas accounts for less than 1% of total automotive fuel sales in Portugal. 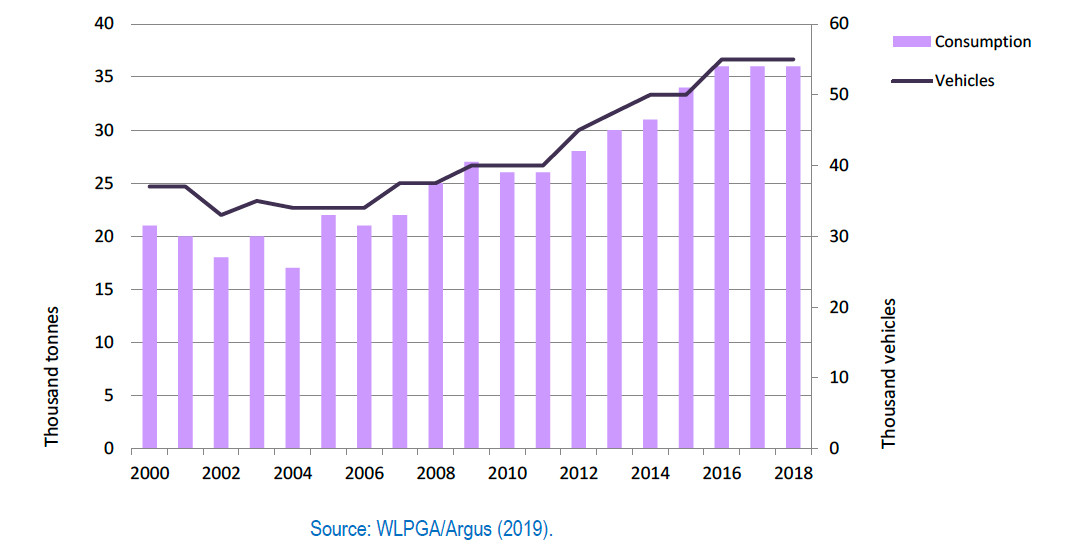 The fleet of vehicles that are able to run on Autogas has grown steadily since the mid-200s, levelling off at around 55 000 by the end of 2016 – about 1% of all the vehicles in Portugal. Most of these vehicles are aftermarket conversions, but sales of OEM vehicles have been growing: there are currently 15 OEM models available: Alfa Romeo’s Giulietta; Dacia’s Sandero and Logan MVC; Fiat’s Punto, Evo, Bravo and 500; the Hyundai 10; the Lancia Ypsilon; the Mitsubishi Lancer; Opel’s Zafira, Insignia, Mokka X and Astra; and the Subaru Legacy. There are around 70 convertors around the country. At the end of 2018, there were 376 refuelling stations selling Autogas across the country – 21 more than a year before.

A relatively low excise tax is the principal government incentive for Autogas. The tax amounted to 14.1 euro cents/litre in 2018 – almost four times lower than that on gasoline and three times lower than that on diesel (Table B17.1). The tax rate for Autogas has barely changed since 2014, while that on the other two fuels has risen significantly. Combined with relatively low wholesale LPG prices, the low excise tax on Autogas results in a low pump price. In 2018, the price averaged 65 cents/litre – less than half that of diesel and only 42% of that of gasoline. These shares have fallen sharply since 2010. 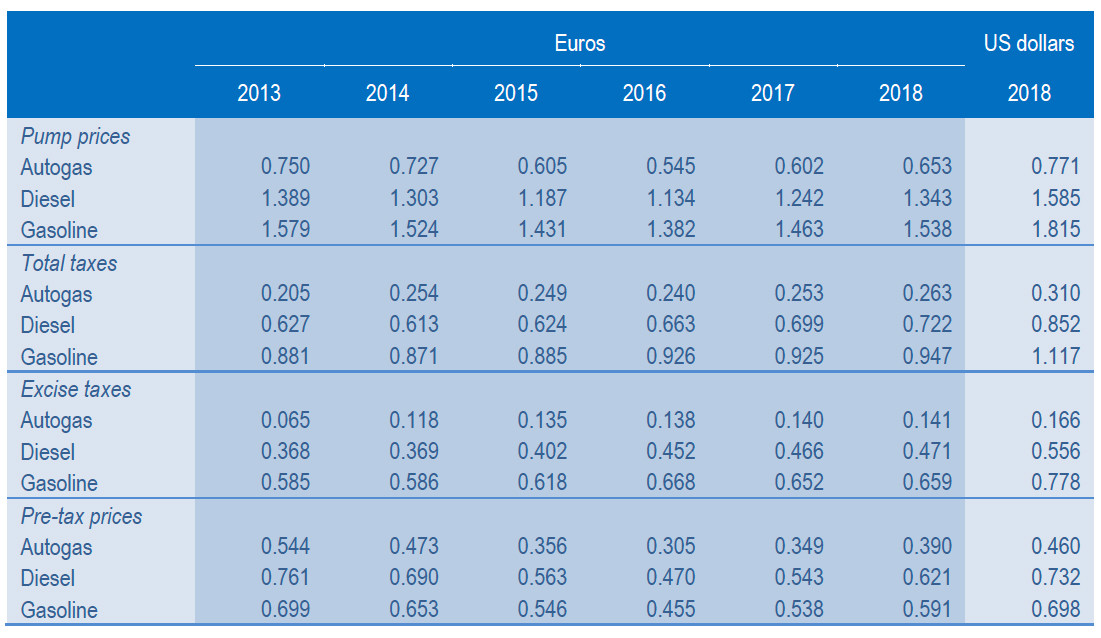 No grants are available from the central government or local authorities for converting gasoline vehicles to Autogas. But the government has introduced legislation to facilitate the use of Autogas and CNG/LNG. Law 13, adopted in 2013, sets out technical standards for vehicle conversions and permits vehicles using gaseous fuels to use underground carparks. As in most other European countries, grants and tax rebates are available for purchasers of EVs.

In March 2018, Autogas filling nozzles in all refuelling stations in Portugal were replaced with the Euroconnector system, which was already used everywhere in neighbouring Spain. Previously, several different filling systems were in use in Portugal.

In 2017, the government published a national action plan for alternative fuels infrastructure, which projects a 15% increase in the number of Autogas refuelling stations by 2020).1

The highly attractive pump price and relatively low conversion costs result in very short payback periods for switching to Autogas. The break-even distance for Autogas against gasoline was just 15 000 km in 2018 for an OEM vehicle, or about one year’s driving for the average private motorist, based on a typical price premium of €820 (Figure B17.2). For a converted car, the breakeven distance was 26 000 km, assuming an average conversion cost of €1 500. Autogas is always cheaper than diesel regardless of distance.