Poland has the largest Autogas market in the European Union and the fourth-largest in the world after Turkey, Russia and Korea. The market grew rapidly in the 1990s and the first half of the 2000s, but demand fell back temporarily between 2006 and 2013 due to a marked improvement in fuel economy as old cars were replaced with more fuel-efficient models. Demand rebounded in 2014, thanks to a steady widening of the tax advantage of the fuel, especially over diesel, and a corresponding increasingly attractive price at the pump. Autogas consumption reached 1.91 million tonnes in 2017 – 7% up on 2016 and surpassing its previous historic peak of just over 1.8 Mt in 2007, but dropped by 4% to 1.83 Mt in 2018 despite continuing growth in the fleet of Autogas vehicles (Figure B16.1). It now accounts for roughly 9% of total road-fuel use in Poland and 76% of the country’s total LPG consumption. Most of the country’s LPG needs are imported, mainly from Russia, Kazakhstan and Lithuania. 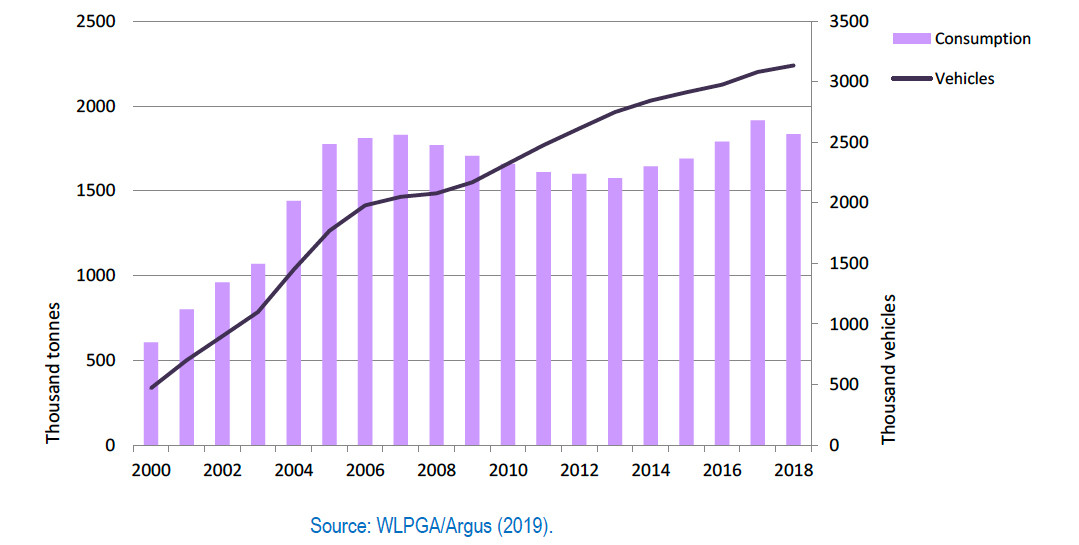 The fleet of vehicles that are able to run on Autogas has grown steadily since the 1990s, reaching more than 3.1 million by the end of 2018 – almost 13% of all the vehicles in Poland (and 15% of passenger cars). The fact that the fleet continues to grow while fuel consumption is declining suggests that a growing number of vehicles may no longer be in regular use though still registered (POGP, 2019). Most vehicles are LDVs for private and commercial use, but some Autogas-fuelled buses have also been brought into service. Most Autogas-powered LDVs are conversions: in 2018, 63 000 kits were installed, 25 000 converted vehicles were imported and 9 100 OEMs were registered, more than offsetting the 44 000 Autogas cars that were scrapped. Conversion costs are low compared with Western European countries, mainly due to lower labour costs. There is a wide range of conversion kits on offer, including the local brand, STAG, produced by ACSA. Sales of OEM Autogas vehicles have also been growing as the number of OEM models available on the Polish market has expanded. Dacia and Skoda are the market leaders, with Hyundai-Kia, Opel, Renault-Nissan and others also marketing Autogas cars (either factory-fitted or converted by the importer).

The Autogas refuelling network in Poland has been expanding rapidly in recent years. At the end of 2018, there were 7 432 refuelling stations selling Autogas across the country – 18% more than a year before. Most of these stations are small, family-run businesses, though more large service stations are installing Autogas pumps.

The success of Autogas in Poland is the result of both a large excise-tax advantage over gasoline and diesel, which ensures a relatively low price of the fuel at the pump, and relatively low pre-tax prices. The excise duty on Autogas has barely increased since 2005, while that on the other two fuels continued to rise until 2013, especially in the case of diesel (the rates on all three fuels have been constant since 2014). The tax on Autogas is now less than an a third of the amount charged on gasoline and diesel (Figure B16.1). Wholesale LPG prices are also much lower, helped since February 2015 by the removal of a small import duty. Consequently, the pump price of Autogas in 2018 was just 45% that of gasoline (unchanged from 2017) and 45% that of diesel (down from 47% in 2017). 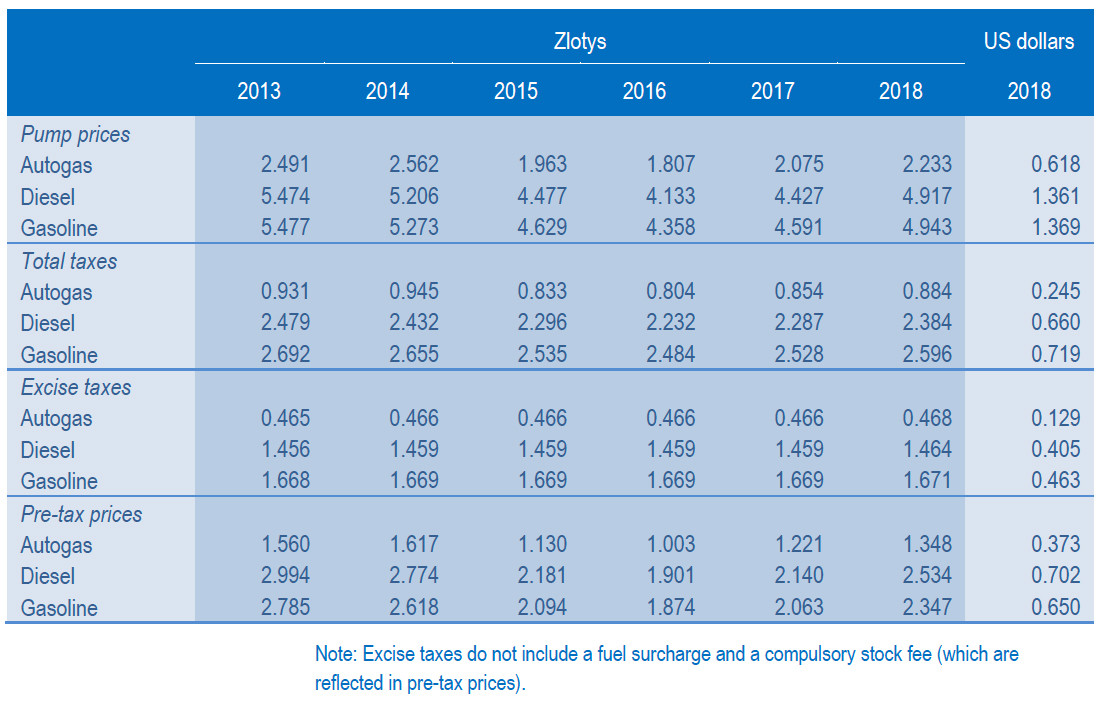 In contrast with some other Autogas markets that have seen rapid growth, there are no grants or other kinds of subsidy for vehicle conversions, nor the installation of distribution and refuelling infrastructure. Autogas may benefit from planned changes in legislation on clean transport, which is expected to include tighter controls on emissions, especially from diesel vehicles.

The break-even distance for Autogas against gasoline vehicles is very low in Poland, both because of the big price advantage and the relatively low costs of vehicle conversions and OEM vehicles. The average cost of converting an old gasoline car is estimated at around 2 800 zlotys (about $775). This yields a break-even distance of just 17 000 km – little more than one year of driving for a private car owner and much less for a taxi or commercial operator – based on average 2018 fuel prices (Figure B16.2). An OEM autogas vehicle breaks even with gasoline at a slightly greater distance of 21 000 km assuming an average premium of about 3 500 zlotys ($970), though the premium is a lot lower and even zero in some cases (which means that the running costs of an Autogas vehicle are always lower than those of a gasoline vehicle). Autogas is always cheaper than diesel regardless of distance as the cost of buying a diesel car and fuel costs are higher.