Italy has the second-largest Autogas market in the European Union after Poland and the sixth-largest in the world. It was one of the first countries to introduce the fuel, in the 1950s. Consumption originally peaked at 1.4 million tonnes in 2001, declining steadily to below 1 Mt in 2007; it has since rebounded, hitting a new all-time high of 1.70 Mt in 2016, thanks to favourable taxation, vehicle acquisition and conversion incentives, and local measures to encourage clean vehicles. Demand dropped in 2017 to 1.67 Mt and again to 1.61 Mt in 2018 (Figure B10.1), though the Autogas fleet continues to expand. Autogas accounts for 46% of total LPG consumption in Italy and more than 5% of total automotive-fuel demand. 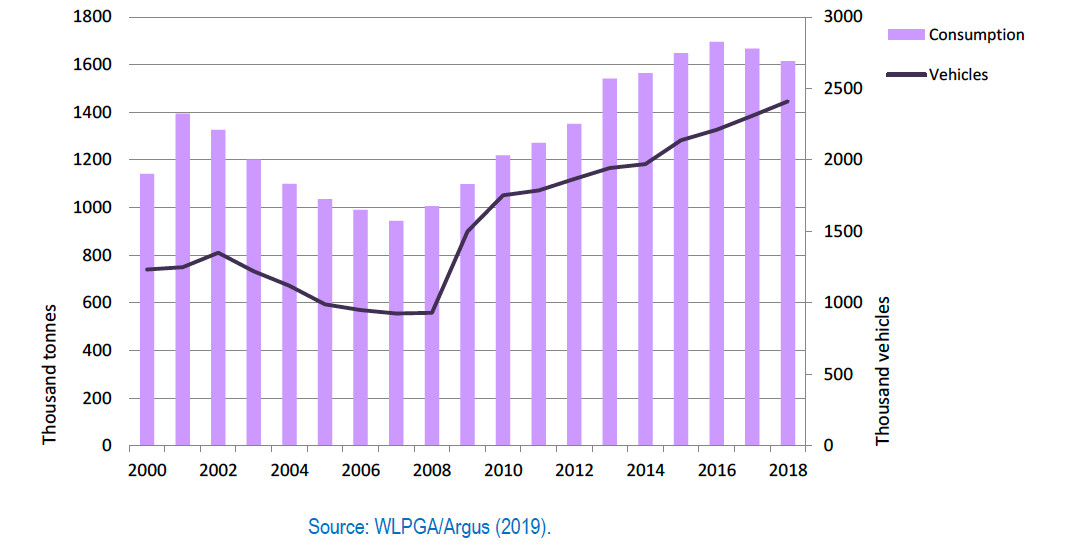 The number of Autogas vehicles in use has surged in recent years, reaching over 2.4 million at end-2017 – almost 6% of all cars and trucks in Italy. The Autogas fleet is two-and-a-half times larger than just a decade earlier. Historically most Autogas vehicles were converted gasoline-fuelled vehicles, but sales of OEM vehicles have now overtaken conversions. The introduction of a generous subsidy led to a jump in OEM purchases in 2009-2010: about 600 000 new Autogas cars were sold in just those two years. Sales have since dropped. At present, 16 carmakers market a total 51 of Autogas models in Italy. Italy remains home to several Autogas engine and conversion-kit manufacturers, with a well-established network of installers. The number of refuelling sites continues to grow, reaching 4 120 at end-2018 – about onefifth of all service stations in Italy.

Italy has traditionally promoted the use of Autogas, initially to provide an outlet for surplus volumes of LPG from the large domestic refining industry, though the country has since become a net importer. In recent years, environmental concerns have been the main driving force behind Autogas policies.

The central government and local authorities encourage Autogas use through a mixture of policies, including favourable fuel taxes, incentives for clean vehicles and traffic regulations. Autogas currently enjoys a substantial excise-tax advantage of 58 cents/litre over gasoline and 47 cents/litre over diesel (Table B10.1). There has been no significant change in tax rates since 2013. The pump price of Autogas in 2018 was equal to just 42% of that of gasoline and 45% of that of diesel – little changed from the previous year. 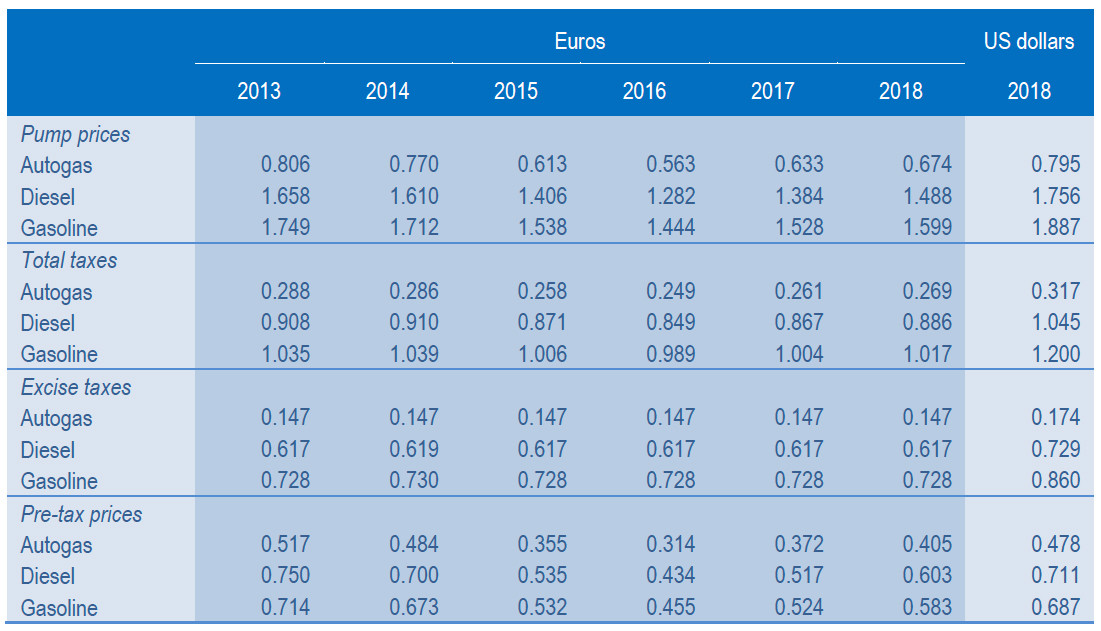 The Italian government also encourages Autogas and other clean fuels through vehicle incentives. Grant schemes for the conversion of an existing vehicle or the purchase of an OEM Autogas vehicle have been used periodically. In May 2014, grants were reintroduced for the purchase of Autogas and other alternative fuel vehicles on condition their CO2 emissions do not exceed 120 g/km for businesses and 95 g/km for private motorists (though the grants were conditional on scrapping an existing vehicle more than 10 years old for businesses). The grant was limited to 20% of the total cost of the vehicle (before tax) up to a maximum of €4 000 for cars with emissions of between 51 and 95 g/km and€2 000 for those purchased by companies with emissions of between 96 and 120 g/km. In 2014, the total budget for the scheme amounted to €64 million, including unspent funds from the previous year. The scheme has since been phased out and replaced by a new scheme that came into effect in 2019, which offers grants of up to €6 000 for buyers of a new electric, hybrid or methane gas-powered car, but not an Autogas vehicle. The incentives will run until 2021 and total up to 300 million euros a year.

Some local initiatives to promote cleaner transport benefit Autogas. For example, the region of Emilia-Romagna, in northern Italy, is offering grants of up to €2 500 to small and medium-sized businesses to purchase fleet vehicles that run on alternative fuels, including Autogas.1 The aim of the “ecobonus” is to replace light commercial diesel vehicles up to 3.5 tonnes that meet only the Euro-3 standard with bi-fuel Euro-6 vehicles. The Lombardy region has allocated €1.8 million for 2018 and €6 million for 2019 in grants to replace the most polluting vehicles with alternative fuelled ones, including Autogas.2 The region of Fruili Venezia Giulia has approved grants of up to €3 000 for scrapping old diesel and gasoline vehicles and replacing them with Autogas or CNG vehicles (€4 000 for hybrids and €5 000 for EVs); a total budget of €1.512 million has been allocated to the programme. 3 The Piedmont region also recently approved grants for converting existing vehicles to clean fuels, including Autogas.4

In many parts of Italy, Autogas vehicles also benefit from a lower annual vehicle road tax, which depends on engine power and CO2 emissions. For example, exemptions are granted for new vehicles or conversions in Lombardia, Toscana, Piemonte, Puglia and Trentino Alto Adige. In addition, a number of cities and regions have adopted “soft measures”, such as traffic regulations that exempt Autogas vehicles from driving restrictions imposed on gasoline and diesel vehicles during periods of acute pollution, provide free access to congestion-charging zones or grant free parking for Autogas vehicles. In Lombardy, for example, restrictions on Euro 1 and 2 diesel vehicles will be introduced in October 2018. It is also reported that licences for refuelling stations to offer lucrative on-site side-business, such as cafes, can be made conditional on supplying Autogas.5

The large fuel-tax advantage over gasoline and diesel makes Autogas the cheapest fuel option, regardless of eligibility for the conversion grants that are still on offer. Assuming a typical price premium of €1 000, an OEM Autogas car breaks even with gasoline at just 17 000 km – barely one year of driving for a private motorist – based on average 2017 fuel prices (Figure B10.2). Assuming an average cost of 1 300 for installing a conversion kit, a converted Autogas car breaks even at 23 000 km (assuming it is not eligible for a grant). Diesel breaks even with gasoline at 43 000 km, but is never competitive with Autogas (assuming a diesel LDV costs €1 500 more than an equivalent gasoline vehicle).