The Greek Autogas market has seen spectacular growth since 2010, though demand growth has slowed significantly since 2016. Consumption reached 266 000 tonnes in 2018, up from 260 000 in 2017 and just 9 000 tonnes in 2009 (Figure B8.1).1 Autogas was introduced in Greece in the 1980s, but its use was initially limited to taxis – most of which switched to the fuel. In the mid-1990s, the authorities opted to replace the existing Autogas taxi fleet with diesel cars, causing Autogas use to decline. The government made it legal for all vehicles to use the fuel in 1999, but there was little interest in the fuel for the first decade as there were few refuelling stations and the financial incentive to switch to Autogas was minimal. This changed with a sharp rise in excise duties on gasoline and diesel in 2010 – bigger than that imposed on Autogas – as the government sought to raise additional tax revenue in the wake of the financial and economic crisis, making Autogas the cheapest fuel option for Greek motorists. Autogas now accounts for about 5% of total road-fuel use in Greece and 49%of total LPG consumption. 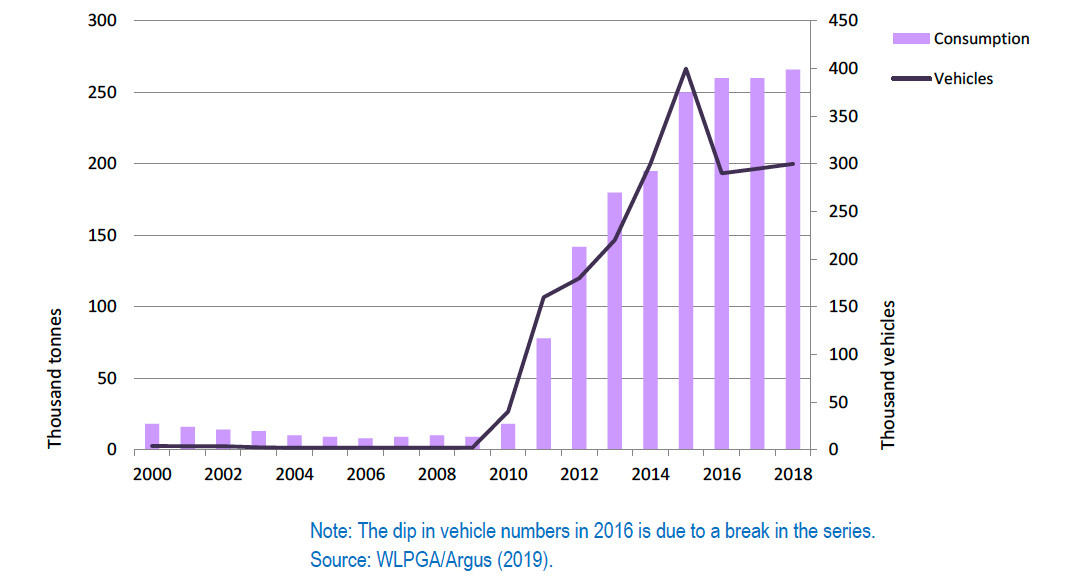 The recent growth in the number of vehicles able to run on Autogas has been phenomenal. In 2018, their number reached an estimated 300 000, compared with just 2 000 in 2009. Autogas vehicles now make up about 5% of the total vehicle fleet. Most of these vehicles are aftermarket conversions. A number of companies sell conversion kits, notably Icom, BRC, Landi Renzo and Zavoli. A few OEM Autogas vehicle models (with bi-fuel capability) are available on the Greek market: Opel Zafira & Meriva, Fiat Punto & Panda, Chevrolet Spark and Ssang Yong Tivoli and XLV (a new after-sale conversion covered by the vehicle warranty). The Autogas distribution network has expanded rapidly in recent years to accommodate the boom in demand, with the number of refuelling stations reaching 1 150 in 2018. The majority of Autogas sales are made by two companies, Hellenic Petroleum and Motor Oil, and the rest by around 30 small retailers. 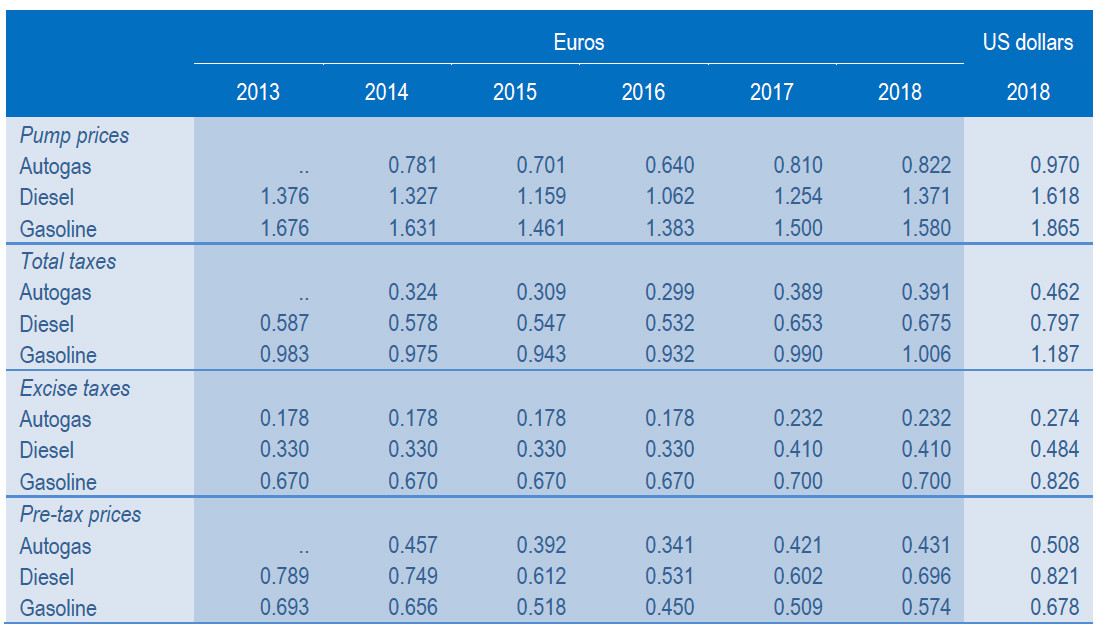 Government policies in recent years have tended to favour diesel – the main competitor to Autogas in Greece. In addition to the cut in the excise tax earlier in the decade, a new law in 2011 lifted the ban on diesel vehicles in Athens and Thessaloniki on condition they meet Euro 5 or 6 standards. The result of these measures has been to boost sales of diesel cars and limit the potential for more conversions to Autogas. The recent rise in the tax on diesel may signal a change in policy.

Other than taxation, there are no other government incentives to encourage Autogas. However, the authorities recently modified the regulations relating to refuelling stations, reducing the minimum distance between Autogas pumps and LPG tanks to two metres. This will make it easier for refuelling stations to install Autogas dispensing facilities where they do not already exist.

The cost of converting a gasoline-powered car to Autogas ranges from just €550 to €1,300 for standard kits, averaging around €700 (kits for directinjection systems are more expensive). As a result, in 2018, Autogas broke even against gasoline at just 16 000 km – little more than a year for an average private motorist (Figure B8.2). For a bi-fuelled OEM Autogas car, which typically costs €1 000 more than a gasoline model, the breakeven distance was higher, at around 24 000 km. Autogas was always competitive against diesel, as the price premium for a diesel car over a gasoline car was considerably higher (€2 500 on average). These breakeven distances, which fell slightly in 2018, are among the lowest in the world, explaining the continuing strong demand for the fuel.

No other alternative fuel is competitive with gasoline or diesel: a CNG vehicle is much more expensive to convert (more than €2 000) and the fuel is not widely available, while an EV is still more than twice as expensive as a gasoline car.