Autogas use in China grew rapidly, though in a rather uneven fashion, between 2000 and 2014, in line with rapidly rising use of LPG generally, but has fallen significantly since 2016. Nationwide, consumption amounted to 750 000 tonnes in 2018 (just over 1 Mt including Hong Kong) – a fall of almost one-quarter in just two years and back to the level of 2013 (Figure B4.1). Just two cities – Guangzhou and Hong Kong – account for the bulk of the Chinese market. 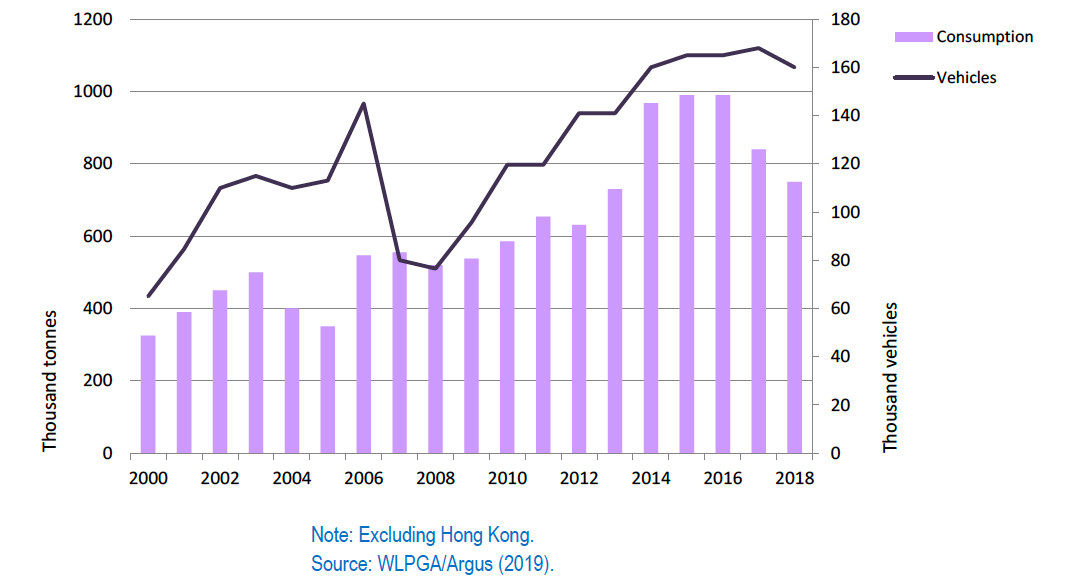 The overwhelming bulk of Autogas use is in taxis and buses. Hyundai, Toyota, Sanatan, Kia, Zhonghua, Englon and Nissan market OEM taxis and GAC Group, Zhengzhou Yutong Bus Company, King Long, Ankai and Wuzhoulong Motors market Autogas buses. There are about 30 conversion centres in Guangzhou. Autogas accounts for just 0.3% of total automotivefuel use in China. At end-2018, there were an estimated 160 000 Autogas vehicles and 560 refuelling sites. Autogas made up just 1.4% of total Chinese LPG consumption in 2018.

The Autogas market in China developed largely as a result of local programmes to promote alternative fuels, motivated by the need to tackle the worsening problem of urban air pollution. Autogas schemes, which were initially developed in Hong Kong and Guangzhou City, have now been introduced in more than 25 other cities. In Guangzhou, virtually all of the city’s 19 000 taxis and 90% of its 8 000 buses had switched to the fuel by 2010, with most of the remainder running on CNG or LNG, though a recent change in policy is promoting LNG and EVs (Box B3.1). In Hong Kong, all the city’s 20 000 taxis and 30% of the public buses run on Autogas, as a result of a conversion programme launched in 1997, which involved grants over the period 2000-2003. Diesel taxis were banned in 2006 because of their high particulate emissions and were phased out.

Box B4.1: Guangzhou takes the lead in pushing Autogas

The city of Guangzhou began to investigate the feasibility of Autogas in the mid-1990s based on experience in other Asia-Pacific countries, with some taxis and buses switching to the fuel after 1997. In July 2003, the Leadership Group of Clean Energy of Guangzhou municipal transportation committee was established with the initial goal of converting 100 buses and 480 taxies. Worsening air pollution led to a decision to convert the bulk of the bus and taxi fleet to the Autogas; by 2010, all but 5% of public vehicles were using the fuel. There are currently 42 refuelling stations installed around the city, the majority of them run by private and foreign companies. Initially, subsidies were made available for converting vehicles to use Autogas (but not for OEM vehicle purchases).

The policy towards Autogas changed in 2012, when a new plan covering the period 2013-2020 was adopted by the Guangzhou Development and Reform Committee, under which new buses can only use LNG. In 2016, the Guangdong authorities announced new regulations requiring 90% of all new buses to use electric battery technology and the other 10% alternative fuels including Autogas. For taxis, the share was 70%, rising to 75% in 2017 and by another five percentage points each year thereafter. The Guangzhou government also obliges 10% of the 120 000 number plates for medium and small vehicles issued every year to run on alternative fuels. Other than pricing and mandates, there are no financial incentives for CNG or biofuels, but subsidies are available for EV purchases. As a result of the change in public policy, Autogas consumption in Guangzhou has fallen from a peak of around 400 000 tonnes at the end of the 2000s to under 300 000 in 2016.

Several other cities, including Shanghai, have also mandated the conversion of public taxis to alternative fuels. Beijing is planned to do the same, with the city’s 67 000 conventionally fuelled taxis due to be converted to either Autogas or electricity.1 The central government has announced plans to introduce stricter emissions standards for new vehicles, with local authorities encouraged to adopt them earlier than schedule, which is expected to favour Autogas over diesel and may give a boost to demand for the former fuel.2

The central government promotes the use of Autogas mainly through favourable pricing and tax policies. No consumption (excise) tax is levied on Autogas, while the tax on gasoline and diesel was raised substantially at the end of 2014 and early 2015 (they have been stable since). In addition, a lower VAT rate of 11% is levied on Autogas (down from 13% in 2016), compared with 17% on gasoline and diesel. Wholesale and retail prices of all oil products, including transport fuels, are controlled by the National Development and Reform Commission, though there is some flexibility for retailers to adjust prices. Under a new mechanism introduced in 2013, it adjusts prices periodically according to changes in crude oil prices on the international market and domestic economic conditions. In 2018, the resulting pump price of Autogas was 56% of that of gasoline and 76% of that of diesel (Table B4.1).

Table B3.1: Automotive-fuel prices and taxes per litre – China 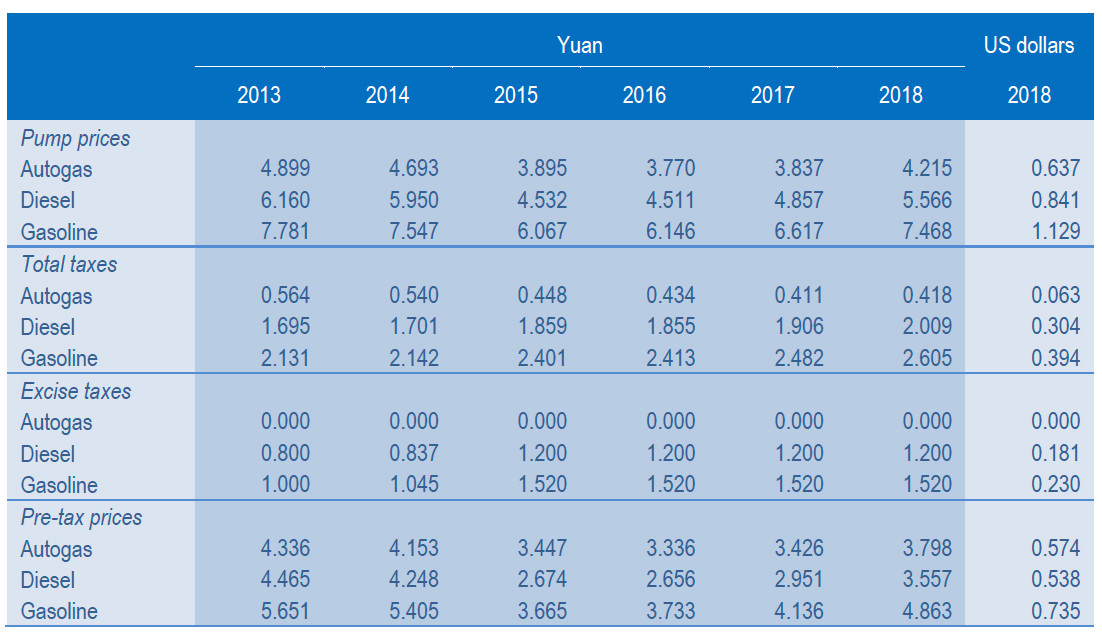 Based on average 2018 fuel prices, a converted non-commercial Autogas LDV breaks even with gasoline at 26 000 km, based on a conversion cost of around 4 500 yuan (approximately $700). For an OEM vehicle, the break-even distance is 49 000 km, assuming it costs 8 500 yuan ($1 300) more than a mono-fuel gasoline vehicle. Autogas is never competitive with diesel, which breaks even with gasoline at just 12 000 km (Figure B4.2). Where diesel is not permitted for high-mileage public vehicles for environmental reasons, Autogas can be the most economic fuel option depending on the price of CNG/LNG. It should be noted that automotive fuel prices and, therefore, the relative competitiveness of Autogas can vary markedly across cities where the fuel is available. Regulations concerning fuel use, notably for public vehicles, also vary. 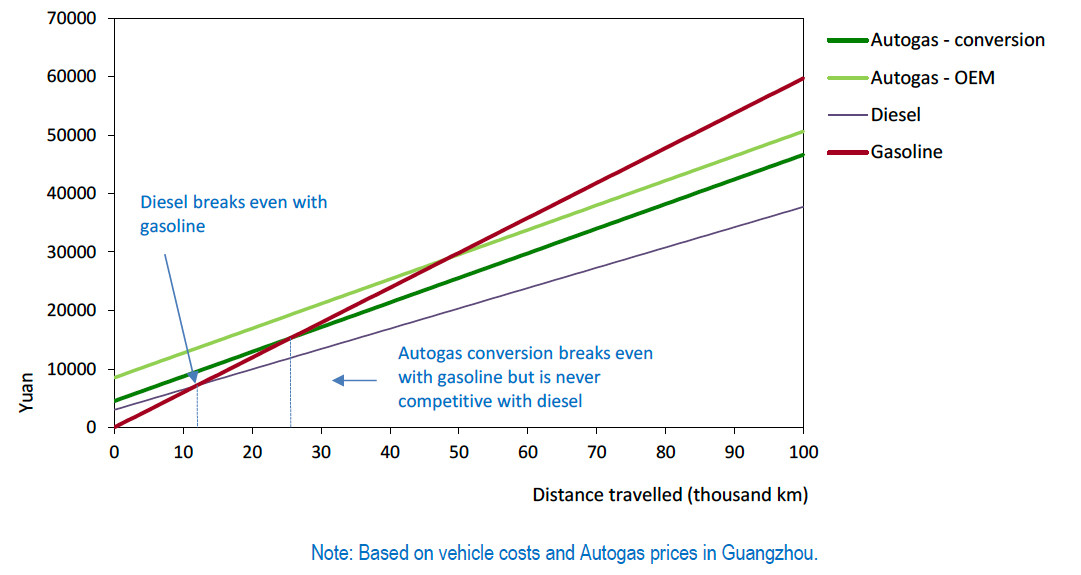