The Bulgarian Autogas market took off in the 1990s and continued to grow steadily through most of the 2000s, with demand stalling in 2008 following the financial and economic crisis. After a period of stagnation, demand rebounded, reaching 405 000 tonnes in 2017, before falling back 395 000 tonnes in 2018 – about 13% of total road-fuel use (Figure B2.1). The market has been driven solely by favourable taxation of the fuel vis-à-vis gasoline and diesel and the relatively low cost of conversions, which account for most of the Autogas vehicles in use today. Autogas accounts for 90% of all the LPG consumed in Bulgaria. 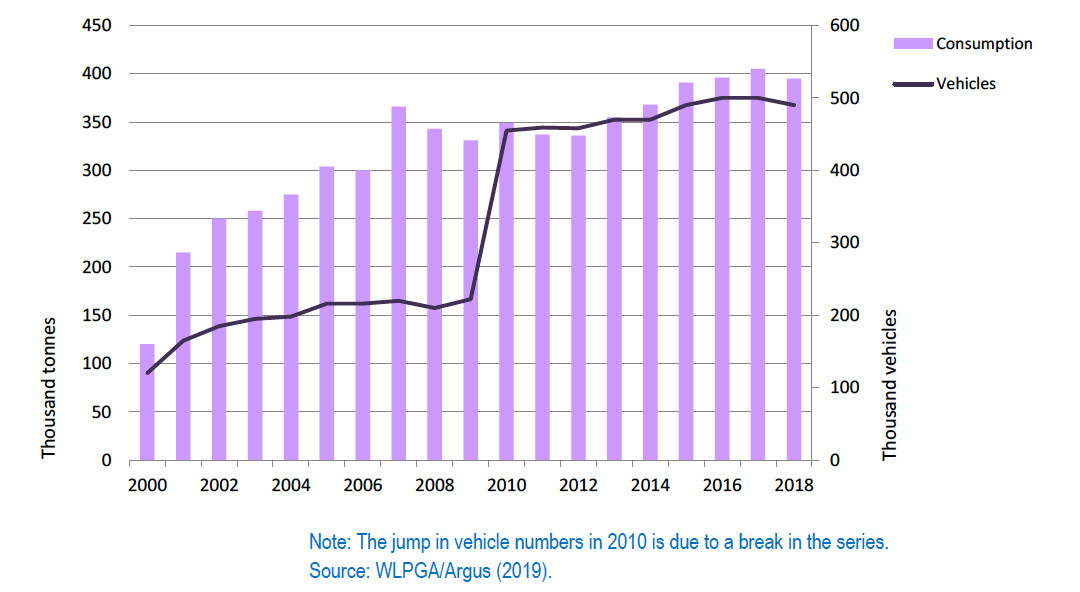 The Autogas vehicle fleet has grown rapidly in recent years as private motorists, taxis and other commercial vehicles have switched from diesel and gasoline usually by installing conversion kits in existing vehicles. The number of Autogas vehicles has more than doubled since the end of the 1990s to an estimated 490 000 in 2018, making up about 13% of the total vehicle fleet. There are several marketers of conversion kits, including Sofgas, AGU-serviz and Lovato, and a certification scheme for conversions has been introduced. Some carmakers now market OEM models in Bulgaria, notably Dacia. The number of refuelling stations selling Autogas also expanded quickly to 2014, though it has since fallen slightly to an estimated 2 800 in 2018.

The principal policy incentive for Autogas is a low rate of excise tax relative to other fuels. The rate has been constant at 0.184 lev/litre for several years, compared with 0.646 lev/litre on diesel and 0.71 lev/litre on gasoline (unchanged since 2013) (Table B2.1). Combined with a very low wholesale price of Autogas, this tax advantage translates into a highly competitive price of the fuel at the pump. In 2018, the average pump price of Autogas was equal to just 47% of the price of both gasoline and diesel.

Table B2.1: Automotive-fuel prices and taxes per litre – Bulgaria 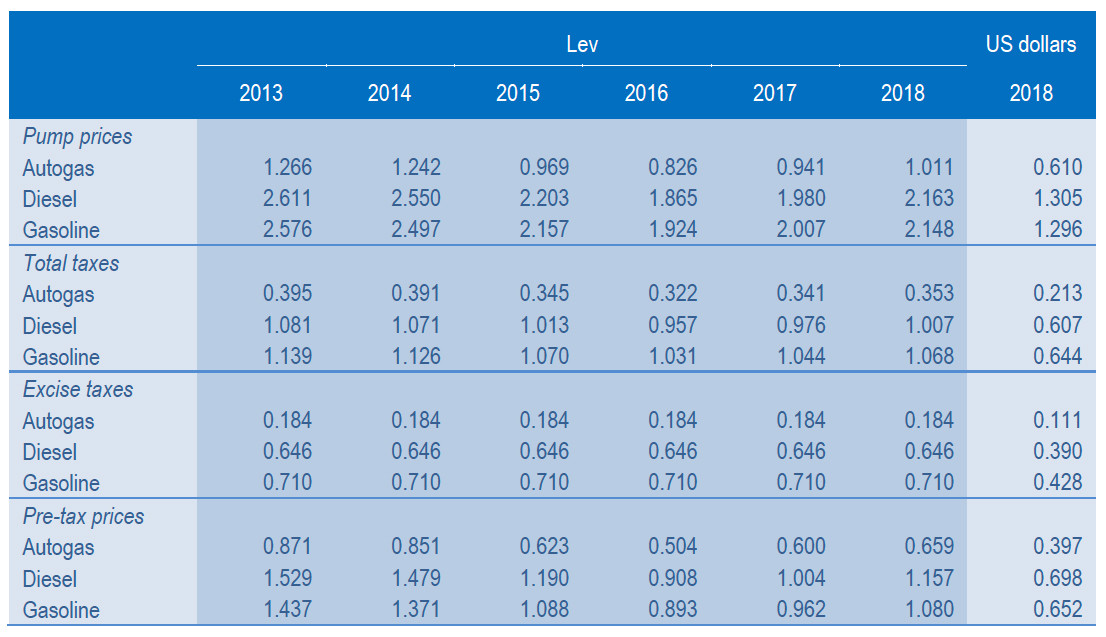 The low price of Autogas at the pump makes the fuel by far the cheapest fuel option at present in Bulgaria. The financial incentive to convert an existing gasoline LDV to run on Autogas is particularly strong because of the very low cost of conversion – around 800-1 000 lev, or roughly €400-500 (Figure B2.2). Based on average 2018 fuel prices, the breakeven distance against gasoline is only 13 000 km – about one year of driving for a private motorist. An OEM Autogas car breaks even at about 43 000 km assuming an average price premium over a standard gasoline car of 3 000 lev (€1 500). The high price of diesel and the higher purchase price of a diesel car mean that the fuel is never competitive with Autogas and breaks even with gasoline only at above 120 000 km.