Australia has a comparatively long history of Autogas use. The federal government started to encourage the use of Autogas in 1981 for reasons of energy security – the country is a large producer and exporter of LPG, derived mainly from natural-gas processing – and air quality. The market took off in the 1990s thanks to a combination of a zero-excise tax on Autogas and generous vehicle-conversion grants. Autogas consumption fluctuated at around 1.1 Mt per year between 2004 and 2010 (Figure B1.1). 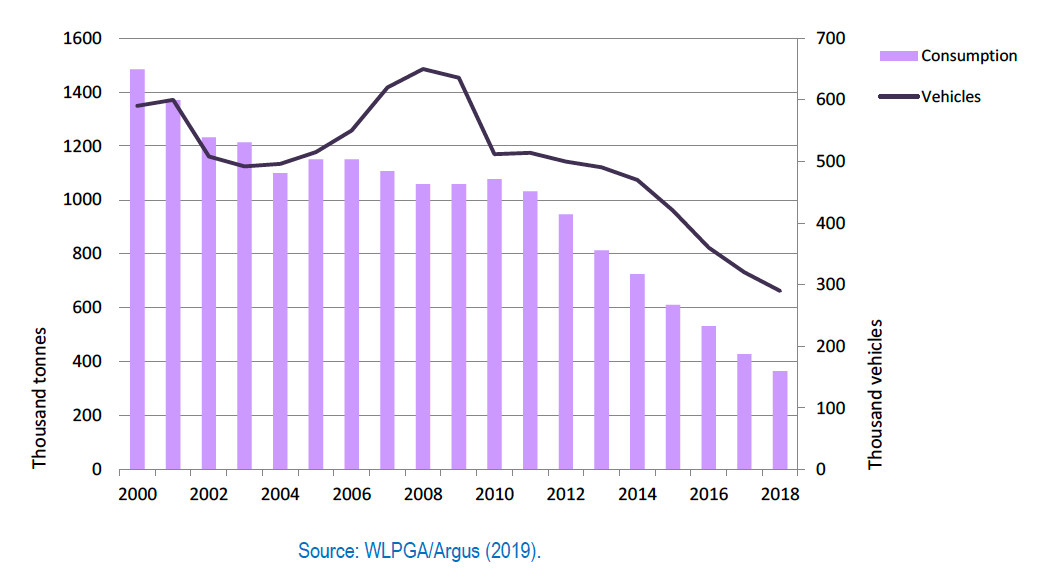 The market started to contract in 2011 as a result of the introduction of, and progressive increase in, an excise tax on Autogas, improved fuel economy and consumers shunning large six-cylinder vehicles, which have been the mainstay of the Australian Autogas market, in favour of smaller four-cylinder vehicles, diesels and hybrids. In particular, there has been a shift in demand from fleet operators away from Autogas to diesel vehicles (ABMARC, 2016). The phase-out of federal and state government grants for converting or buying Autogas vehicles also contributed (see below). Sales dropped to just 365 000 tonnes in 2018 –almost 50% down on 2014 and less than a quarter of the level of 2000, when they hit an all-time peak of almost 1.5 million tonnes. Autogas use was equal to less than 1.5% of total road-fuel consumption in 2017 compared with a peak of 6.6% in 2000.

The state of Victoria has the largest Autogas market in Australia. Nationwide, Autogas use is particularly high among taxis, about half of which run on the fuel. Autogas accounts for 27% of the country’s LPG consumption.

The prospects for Autogas use in Australia have been further undermined by the recent closure of the Ford and General Motors (Holden) car factories in the country, where dedicated OEM Autogas models were produced. Local production of LPG has also fallen with the recent closure of three refineries, though this has been offset to some extent by rising output from natural gas processing plants. The number of aftermarket conversions has also fallen, with most conversions involving kits produced by Prins, Landi Renzo, Sprint Gas and IMPCO. Autogas has also come under pressure from the dieselisation of the new vehicle fleet, with some models now only being made available with a diesel engine, limiting the scope for aftermarket conversions.

Australia still has an extensive nationwide retail-distribution network, with 1 700 refuelling sites throughout the country serving an estimated 290 000 vehicles at end-2018 (around 1.5% of the total car fleet), though both the number of stations and vehicles has been declining steadily in recent years. Fewer than 40% of all service stations in Australia now sell Autogas with some continuing to decommission Autogas storage facilities.

Government policies on transport fuels have shifted in recent years, with a growing emphasis on promoting low- and zero-emission vehicles. The federal government has traditionally supported the development of the Autogas market primarily through favourable taxation. Up to 2011, Autogas and other alternative fuels (ethanol, LNG and CNG) benefitted from a complete exemption from excise taxes. A tax was introduced on Autogas (as well as CNG and LNG) on 1 December 2011 at 2.5 cents/litre and was scheduled to rise each year on 1 July by 2.5 cents to 12.5 cents in 2015 – still well below the rates applied to gasoline and diesel. In May 2014, the government announced a proposal to index excise-duty rates for most road fuels to inflation every six months. The excise tax on Autogas averaged 13.4 cents/litre in 2018. The taxes on gasoline and diesel are still considerably higher – 41.1 cents for both fuels – but the gap with Autogas narrowed considerably up to 2016.

The pump price of Autogas, including the 10% general sales tax (GST), is currently 55% that of gasoline and 53% of that of diesel (Table B1.1). Despite the introduction of and steady increase in the excise tax on Autogas, the differences in price between Autogas and the two other fuels have barely changed since 2011, because pre-tax Autogas prices have fallen relative to those of gasoline and diesel prices as a result of international price movements. The pump price of Autogas increased by less than that of both gasoline and diesel in 2018 in both absolute and relative terms. 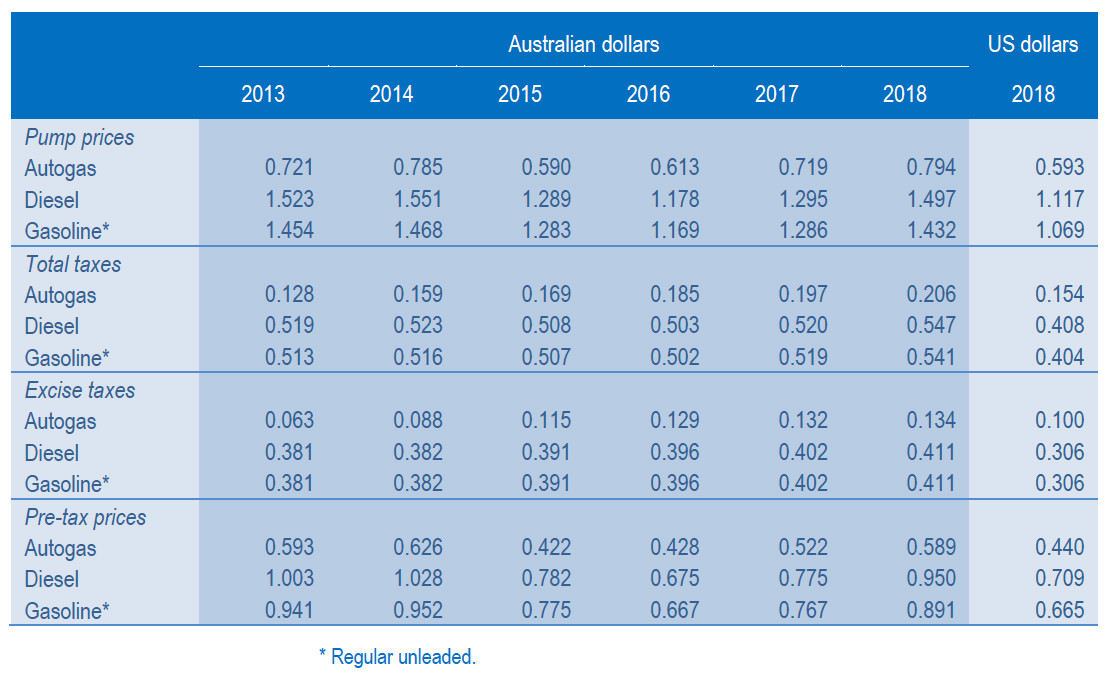 The federal and state governments no longer make available grants for the conversion of existing vehicles or purchase of an OEM Autogas vehicle. The LPG Vehicle Scheme, introduced in 2006, provided grants to private motorists for the conversion of existing LDVs of less than 3.5 tonnes or the purchase of an OEM Autogas LDV. The scheme was capped at 25 000 claims per year in 2011 and was closed at the end of June 2014. State governments have also stopped incentives to promote Autogas. For example, the Western Australian government used to provide a subsidy of A$1 000 for Autogas conversions, but the scheme was halted in 2009.

Current government fleet policies focus on fuel efficiency, which favours smaller vehicles and those using hybrid or diesel technology. Some Autogas vehicles can benefit from federal and state government programmes to support low-emission vehicles. For example, the federal government launched in 2015 a low-interest loan scheme for private and public sector vehicle fleets. The biggest incentives are offered to electric and hydrogen fuel-cell vehicles.

Assuming an average conversion cost of A$3 500 (including GST), a converted Autogas-powered light-duty vehicle (LDV) breaks even with a conventional (non-hybrid) gasoline equivalent at just under 100 000 km, despite the favourable rate of excise duty and lower pump price of Autogas (Figure B1.2). The breakeven distance has increased markedly in recent years as a result of the removal of conversion subsidies and, since 2016, an increase in the price of Autogas relative to that of gasoline, though it fell back by around 10% in 2018. Diesel breaks even with gasoline at close to 200 000 km, WLPGA/Liquid Gas Europe effectively making it uncompetitive for all but the highest mileage users, and is never competitive with Autogas.